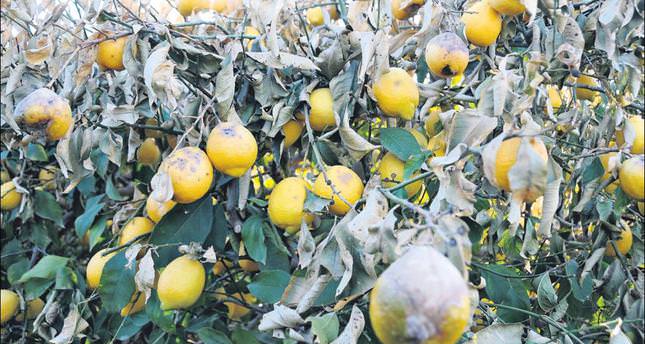 by daily sabah
Apr 29, 2014 12:00 am
ISTANBUL — The Ministry of Food, Agriculture and Livestock conducted a survey about frost in 60 provinces in Turkey between March 29 to 31. According to the survey, 67 cities have been hit with disasters such as drought, flooding, hail and frost since Jan. 1.

As such, farmers are looking forward to a decree which will cover a delay of debts.

The Ministry of Agriculture sent the survey to the Treasury, which offered a delay of the farmers' debts to Ziraat Bank, a state-run bank specifically founded to foster agriculture in Turkey. The cabinet is expected to issue an announcement regarding the issue.
According to Ziraat Bank, there are 411,815 farmers affected by the disasters. The amount of credit used by those farmers is TL 17.344 billion.

An official from the Ministry of Agriculture said the ministry expects a recovery if weather conditions improve in the upcoming weeks as the crops are still alive. "We make premium payments per product," said the official. "When a farmer applies to us stating his product is perished, they will not get the premium paymentsautomatically. Thus, farmers will apply to us after calculating their damage from the frost and their suspendingpremium payments. Namely, farmers who incurred slight damage may not appeal at all in order to be able get premium payments."

The head of the Agriculturists Association of Turkey (TZD) İbrahim Yetkin explained that some fields are reploughed after they were damaged, which shows the extent of the damage. Yetkin noted that the production of fruits and grains declined significantly and the delay of debts would be interest-free. He noted farmers took substantial credit from banks and added, "The announcement that will be issued by the Cabinet will only include Ziraat Bank's credits," said Yetkin. "However, the loans taken from private banks should also be delayed. A new agricultural package should be prepared because of these disasters in Turkey.

Subvention is needed for replanting the seriously-damaged products, which requires a revision in the agricultural budget. The only region that seems to be free of damage is the Thrace, which depends on the rain in the upcoming period."