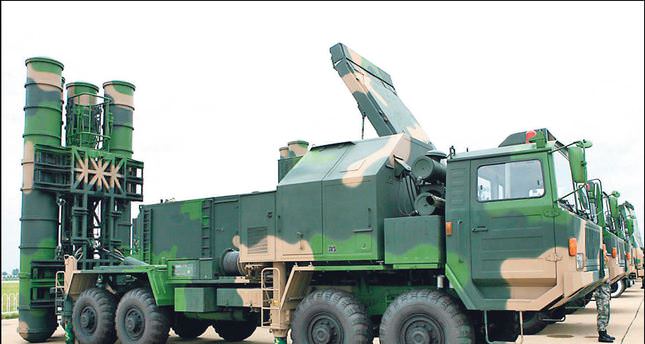 ANKARA — SSM's deadline is expires today and there is no official statement regarding the extension of the deadline.
However, according to sources, the undersecretariat has not completed negotiations; therefore a new extension is very likely. A defense industry expert who spoke to Daily Sabah anonymously said the timeline of the contract negotiations will most likely be dependent on the issues of local production, technology transfer and the integration of the system into the Turkish national air defense network. "If this was an off-the-shelf procurement, negotiations would likely take much less time," the expert said. "The acquisition of such strategic systems naturally has multiple implications on political, economic, military and technologic dimensions. Decisions on a deadline extension or contract signature timing will surely be affected by these parameters, but I personally do not expect any major delays toward issuing the contract."

The Chinese manufacturer of the FD-2000 missile system, the state-run China Precision Machinery Import-Export Corporation (CPMIEC), offered a $3.4 billion high-technology transfer. Turkish government officials announced they preferred the Chinese offer due to its competitiveness and potential for coproduction in Turkey. However, the company is on the U.S. State Department's sanctions list since February 2013 due to proliferation concerns. NATO countries also raised objections to Turkey's move, claiming missile systems within the transatlantic military alliance must be compatible. NATO insists the technology will not be compatible with the evolving ballistic-missile shield being built in Europe.

Turkish SSM officials contend the Chinese missiles are compatible with the NATO systems.

Sources in Ankara believe European companies increase their chances with the recent moves. Antoine Bouiver, CEO of MBDA, a partner company of Eurosam, visited Turkey in March. During his visit, he said his company designed a new program for joint production with Turkey. "This project is very important for Europe," said Bouiver. "We designed a new program which comprises coproduction of radar and other communication tools with Turkish companies." Additionally, a delegation from Eurosam visited Ankara in April and met with officials from SSM and the Ministry of Defense. According to sources, Eurosam updated its offer, lowered its price estimate to under $4 billion and increased the share of local contributions in the project. Meanwhile, U.S. defense industry giants including Raytheon and Lockheed Martin did not revise their offer and declined to offer technology transfer or coproduction to Turkey. As such, defense industry experts do not foresee a high possibility of a U.S. company winning the bid. In addition, recent changes in the management of SSM likely added to the delay in the missile defense system deal. On March 28, the former undersecretary of SSM was removed from office and appointed as chief advisor to Prime Minister Recep Tayyip Erdoğan.

İsmail Demir was then appointed undersecretary of SSM on April 12. Demir was the general manager of THY Teknik, the maintenance subsidiary of Turkey's national carrier Turkish Airlines, and is known as a prominent aviation expert.