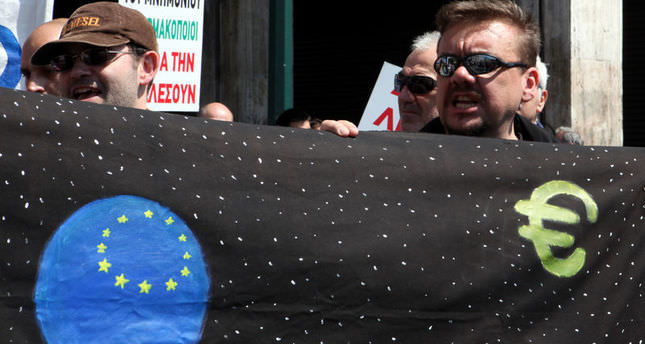 by May 01, 2014 12:00 am
ATHENS — Greece will formally propose stretching the maturity of its international rescue loans from about 30 years to up to 50 as part of a push to make its debt sustainable, a senior Greek finance ministry official told yesterday.

Bailed-out Athens has qualified for more debt relief from the European Union and IMF after topping its budget targets last year and ending its four-year exile from bond markets this month. Under the terms of a deal stuck in November 2012, the EU has promised to provide further debt relief to Greece on condition that it meets its fiscal targets. Talks will be held in the second half of this year. "When the negotiations for Greek debt relief begin we will propose extending the maturities to about 50 years," the finance ministry official said, on condition of anonymity. Greece also said it may tap bond markets again in the next 12 months to raise between 3 and 6 billion euros after it raised 3 billion euros earlier this month with a 5-year bond. According to the finance ministry official, any new bonds will probably have a maturity of below five years to plug gaps in the short-end of Greece's yield curve. Tough austerity measures have wiped out almost a quarter of Greece's GDP, sending unemployment to record highs of nearly 28 percent.