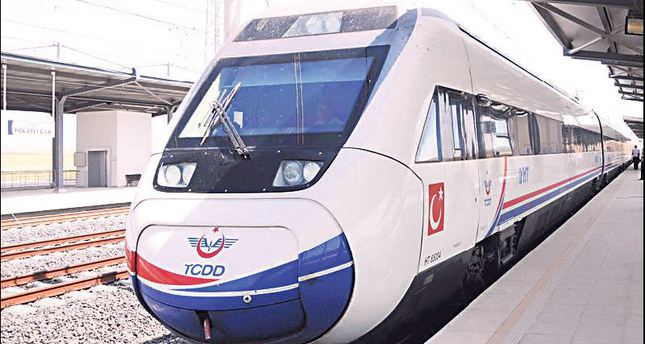 by Daily Sabah May 01, 2014 12:00 am
ISTANBUL — A high-speed train line between Istanbul and Ankara, for which Turkey has been long-waiting will come into service in May.

The high-speed train line covers a distance of 533 kilometers, and the rails are appropriate for trains running at 250 km/hour. With the project being completed, the duration of travel between Ankara and Istanbul has dropped to three hours. The share of 10 percent of railway transportation on this route is targeted to increase to 78 percent. The Ankara-Istanbul Speed Train Line will be integrated with Marmaray and provide uninterrupted transportation from Europe to Asia. With this project, linking the two biggest cities in Turkey, social, economic and cultural exchange between cities will improve. Besides, in the process of accession to the European Union, our country will be prepared in terms of transportation infrastructure.

Minister of Transport, Maritime Affairs and Communications Lütfi Elvan announced that the Istanbul-Ankara high-speed train line will come into service in late May and concluded, "We will both mark the opening and commence service."

The Marmaray tunnel that connects Istanbul's Asian and European sides has transported 21.5 million people since its opening, according to the Turkish Statistics Institute.

The Marmaray opened on the 90th anniversary of the foundation of the Turkish Republic on Oct. 29, and according to Turkish State Railways, around 175,000 people use the increasingly popular tunnel every day. The 13.6-kilometerlong tunnel is 60 meters below the sea and allows travelers to cross from Istanbul's European side to the Asian side in four minutes. Ottoman Sultan Abdülmecid first introduced the idea of a railway tunnel through the Bosporus Strait in 1860.