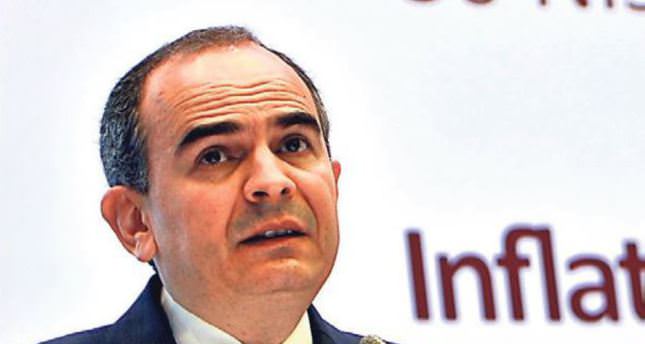 by Daily Sabah May 01, 2014 12:00 am
ISTANBUL — Turkey's central bank has revised its year-end inflation target upwards to 7.6 percent from a previous forecast of 6.6 percent, its governor announced yesterday.

The chairman of Turkey's central bank Erdem Basçı also said the bank might lower interest rates. "The next step could be a moderate and gradual decline in interest rates," he told a news conference. "But while doing this we will maintain the tight monetary policy," he added.

Economy Minister Nihat Zeybekçi brushed off concerns over high inflation. "What matters is high interest rates. We expect interest rates to reach a point as soon as possible which encourages investment and production."

Central bank signals imminent rate cuts Speaking to Daily Sabah, economist Meli Arvas noted that Basçı, surprised markets in signaling an incremental decrease in interest rates. The surprise lay in the fact that only six days ago, the Monetary Policy Committee of the central bank reaffirmed interest rates. He added the year-end inflation number would be closer to 7.6 percent, up 1 percent from the previously announced estimate of 6.6 percent.

Basçı went on to say that inflation would peak in May then decrease throughout the year as the effects of the currency devaluation passed through the economy. "The central bank estimated next year's inflation numbers to come in at 5 percent. The news brought the Turkish lira up against the U.S. dollar to multi-week lows falling below TL 2.11 to the greenback,"

Arvas said. Arvas remarked fixed income markets also rejoiced with yields dropping further to their lowest levels of the year, erasing all effects of the Dec. 17 crisis. "Although the announcement was heralded as good news across the board, the timing of the announcement was not. Why would the central bank indicate a future drop in interest rates, one which has already been de facto realized in the markets, when it just reaffirmed rates less than a week ago? If the inflation report was the only reason for this delay, does the Monetary Policy Committee receive the inflation report at the same time that the general public does? It appears announcement could have been made last week, saving the market from unnecessary volatility in the interim," he concluded.