Turkey's exports hit record in the first quarter of 2014 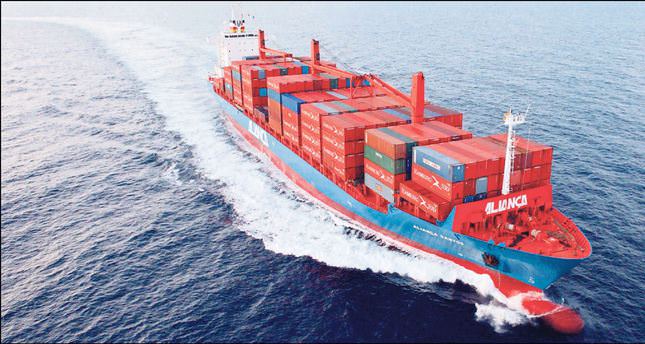 ISTANBUL — Chairman of Turkish Exporters' Assembly (TİM) Mehmet Büyükekşi announced the export figures of April in Kastamonu, a province in the Black Sea region.According to TİM's report, in April total exports increased by 11.5 percent and climbed to $13.15 billion (TL 27.67 billion) compared to the same month of the previous year. In the first three months of the year, total exports increased by 9.5 percent and reached $53.43 billion, which is the highest number reached in the first quarter. TİM's report also noted total exports in the last 12 months increased by 1.6 percent, up $155.76 billion compared to the same period last year. Büyükekşi stressed that the export figure of $14.7 billion in March, which was announced yesterday by Turkish Statistical Institute, was a record in the history of the Republic of Turkey on a monthly basis. "The data displays the positive indications in exports," he said. "Should this performance persist after April, we expect to achieve 2014's target of $166.5 billion in total exports."

During his speech, Büyükekşi evaluated both the national and global economy, commenting that the global economy gradually recovered the loss of the last five years. He also added that the global growth will be at a level of 3.6 percent in accordance with the recent estimations from the IMF. "A rapidly growing Europe is always an advantage to Turkey," he said, and added that an expectation emerged for the delay of increase in interests, which is normally supposed to be made in October in compliance with the U.S. Federal Reserve's decision.Büyükekşi highlighted the statements made by the World Trade Organization on April 14 and commented, "The expectation of an increase in the global trade for 2014 rose from 4.5 percent to 4.7 percent and 2015 is expected to be 5.3 percent. Thus, news from all over the world shows that 2014 can be an advantageous year for Turkey."

Büyükekşi noted the risk outlook of Turkey declined after the elections and the figures of industrial production in January and February increased."Steady currency prices and the flexible interest rates indicate that the shadow of politics is removed from the economy. A strong increase has been continuing in employment numbers for several months. As businessmen and investors, we are looking to see the interest rate cut led by those positive indicators in economy. We believe that the central bank would take the necessary actions with optimum timing on this issue and gradually decrease the interest rates," the chairman said. Büyükekşi noted that with the increasing foreign demand, high exchange rates in Turkey favorably influenced the exports as of the second quarter of the year and continued, "We made a remarkably positive start in 2014. Thus, it was once again proven that our exporters performed better with competitive exchange rates. As a matter of fact, Turkey's export of goods increased by 7.2 percent in the first three months compared to the same period last year. The average export increase in the first 70 exporter countries stuck at 1.6 percent in the first two months. We can progress to only a certain level by just focusing on the domestic market. The path to a stable and sustainable growth is exports," he concluded.

Speaking at the same event' Turkey's Economy Minister Nihat Zeybekçi noted that Turkey has been performing well despite negative domestic and global incidents. "Some international agencies proclaim Turkey will not achieve its exports and growth rate target, which is 4 percent for 2014. Statistics for the first quarter of 2014 indicate that these implications are completely nonsense."