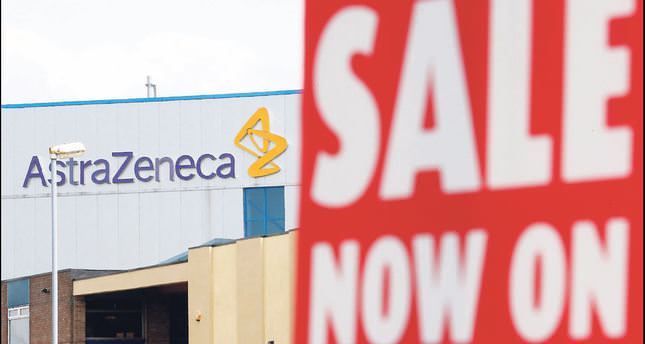 by May 03, 2014 12:00 am
LONDON — British drugs giant AstraZeneca yesterday rejected a sweetened $106 billion (TL 223 billion) takeover bid from U.S. rival Pfizer, hitting out at the "inadequate" offer, as it battles to remain independent.
The rejection came hours after Pfizer had lifted its informal cash and shares bid equivalent to 76 billion euros (TL 223 billion), as it seeks to strengthen its cancer research and slash its tax bill.

The Viagra maker offered 50 pound ($84.61) per AstraZeneca share, higher than the previous bid worth $99 billion."
The financial and other terms described in the (new) proposal are inadequate, substantially undervalue Astra-Zeneca and are not a basis on which to engage with Pfizer," the British group said in a statement. Analysts said Pfizer was now likely to come back with a hostile bid, which, however, may still not force through a deal. "It seems the main driver behind the deal is the desire of Pfizer to shelter $70 billion of its cash pile from U.S. taxation rules, and that doesn't seem a sufficiently good reason to do a deal if you are AstraZeneca," said CMC chief strategist Michael Hewson.

He added: "The Pfizer CEO has talked up the prospects of a deal being good for the creation of new drugs, but AstraZeneca already has a healthy pipeline relative to Pfizer, and reducing competition in the pharmaceutical sector seems a funny way to generate growth in new drugs."

AstraZeneca attacked the new bid for offering a "large proportion" payable in Pfizer shares, noting also that the combined firm would still seek to establish its corporate and tax residency in England. "Accordingly, the board has rejected the proposal," the London-listed firm added. Pfizer has highlighted the considerable tax advantages from the transaction, which would create a new UK-incorporated holding company. Outlining his company's defense, AstraZeneca Chairman Leif Johansson said it "continues to invest significantly in research, development and manufacturing in the U.K., Sweden and the U.S." He added: "We are showing strong momentum as an independent company, in particular with our exciting, rapidly progressing pipeline, which the board believes will deliver significant value for shareholders.

Pfizer's proposal would dramatically dilute AstraZeneca shareholders' exposure to our unique pipeline and would create risks around its delivery. As such, the board has no hesitation in rejecting the proposal."
Earlier Friday, Pfizer Chief Executive Ian Read said, "The industrial logic for a combination between Pfizer and AstraZeneca is compelling." He added that the combined company would bring together "powerful and world-leading" research expertise in key areas such as oncology, inflammation and cardiovascular and metabolic disorders.Pfizer's tilt at AstraZeneca comes as global pharmaceutical giants are forming sector deals worth billions of dollars to cope with lost revenues from patent expirations and the effects of public cuts in health care spending.

The bid for AstraZeneca follows other mega-mergers undertaken by Pfizer, the biggest U.S. drug maker by revenue.
Prior Pfizer takeovers included Warner-Lambert, Pharmacia and Wyeth. The U.S. group said it would look to locate manufacturing operations in Britain and will keep AstraZeneca's commercial manufacturing facilities in Macclesfield in northwestern England. AstraZeneca currently employs more than 50,000 people around the world, including 6,700 in Britain. Pfizer meanwhile has a global workforce of 70,000 staff, of which 2,500 are in Britain.