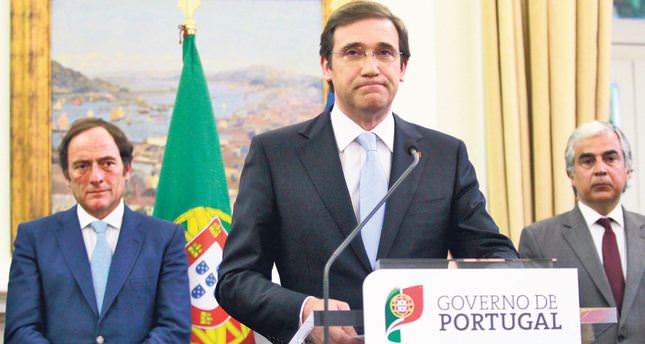 Portugal's prime minister said the country will exit its three-year, 78-billion-euro bailout on May 17 without needing a standby line of credit

LISBON — Portugal decided to make a clean break from its EU-International Monetary Fund (IMF) bailout on Sunday, following in the footsteps of Ireland by forgoing a credit line as it prepares a full return to the credit markets.

The decision, made during an evening cabinet meeting, came after the country passed the final bailout audit by EU-IMF experts on Friday, closing out the essential part of its 78-billion-euro (TL 227 billion), three-year rescue. "The government decided that we will exit our rescue program without resorting to any precautionary programs,"

Prime Minister Pedro Passos Coelho said during a television broadcast following the meeting surrounded by his ministers. The decision was the "best for the interests of Portugal" after the country "regained its credibility." It was applauded by the European Commission, which said it would "support the government and the Portuguese people." Christine Lagarde, the head of the IMF, said the decision meant "Portugal is now able to complete the consolidation of public finances."

Portugal is now set to emerge from the bailout on May 17 and is expected to try to finance itself on bond markets without a so-called safety net, becoming the second stricken Eurozone country to do so after Ireland. Portugal made the decision while still enacting the latest round of severe measures to keep its public finances within targets set by the International Monetary Fund, European Union and European Central Bank. Rafts of reforms tied to rescue loans pushed the country into recession and the people into severe hardship, with cuts in pay, pensions and public services. The auditors, who began their last audit of progress on reforms on April 22, finished their work late on Thursday after marathon negotiations. Their approval of the national accounts and progress opens the way for the release of the last payment of 2.6 billion euros of the total rescue package of 78 billion euros extended in May 2011. By following the example set by Ireland,
Portugal will now proceed to issue bonds without having the back up of a precautionary line of credit.

The strategy decided Sunday comes before a Eurozone finance minister meeting in Brussels on Monday, where the Portuguese minister will present the government's financing plans. Passos Coelho said the government had enough funding reserves to protect itself from at least a year of financial turbulence.

German Finance Minister Wolfgang Schaeuble welcomed the decision. "The announcement to exit the program shows once again that the path the Eurozone has chosen to take is the right one," Schaeuble said in a statement. "Portugal has used the past three years wisely and implemented an extensive program of reforms," he said.

Meanwhile, Portugal's plans to exit its bailout program, along with a discussion about tackling Greece's stubbornly high debt, were the main topics yesterday when Eurozone finance ministers met. The Eurozone finance ministers also discussed bailout recipient Greece, which is struggling with the highest level of debt in the 28-member EU. Greece has been one of the countries worst hit by the Eurozone's economic crisis, but hopes are high in Athens of turning a corner. The country resumed borrowing on financial markets and achieved a primary surplus after almost a decade of shortfalls.