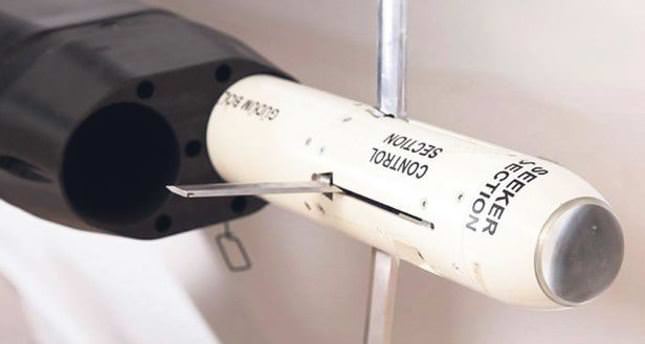 by Daily Sabah May 06, 2014 12:00 am
ABU DHABI — The United Arab Emirates last year chose to purchase anti-aircraft Turkish Cirit missiles and last week Turkish weapons manufacturer Roketsan delivered the first batch of the promised 10,000 missiles to the UAE. The total sum of the deal is $190 million (TL 400 million). One of the leading defense industry companies, Roketsan delivered 2,000 Cirit missiles last week that are able to strike with 100 percent precision. The contract signed between Roketsan and the UAE in 2013 covers the sales of 10,000 Cirit missiles, with 8,000 more to be delivered in the future.

Active laser-guided Cirits are the most effective weapon of Turkish attack helicopter ATAK. The weapon is Turkey's first laser-guided missile with an 8 kilometer-range and is able to strike lightly armored targets on the nose. The United Arab Emirates intends to use the Cirit missiles not only in aircrafts but also in terrain vehicles. Turkey has also made the large-scaled production of long range MIZRAK-U and medium range MIZRAK-O anti-tank missiles.

Developed by ROKETSAN, MIZRAK-U with maximum range of 8 kilometers and minimum range of 500 meters is capable of operating all weather conditions and day/night. MIZRAK-O, with its 4 kilometers maximum range and 200 meters minimum range which can be used in Fire - Forget and Fire - Update modes, with the elasticity provided by its target update capability, offers possibilities to fire in covered position, to fire at targets behind cover, to point precisely and to evaluate the effectiveness of the hit. It can also be used against fixed and moving targets.