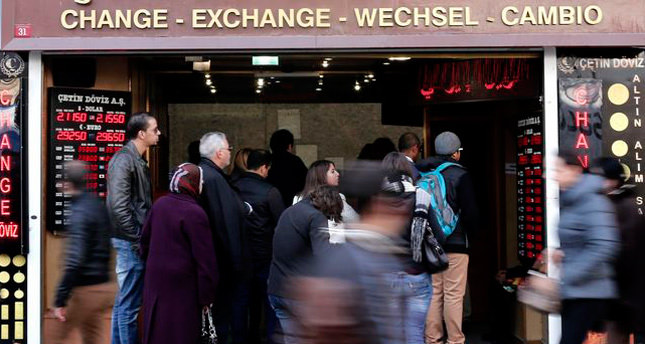 by Daily Sabah May 06, 2014 12:00 am
ISTANBUL — The Turkish central bank announced the inflation rate in April was influenced by an increase in foreign exchange rates and the pressure of prices in the manufacturing industry on consumer prices that resulted in increased costs.

"The cumulative effects of the devaluation in Turkish lira continued to be observed in the prices of main goods and core inflation indicators persisted to lean toward an increase," the central bank said in a report. Annual inflation in food and non-alcoholic drinks increased by nearly three points and climbed to 13.15 percent.

"In the group of non-processed foods, annual inflation rose to 15 percent with an increase of 5.2 points in relation to the negative outlook of fruit and vegetable prices. The pace of monthly increase in prices of processed foods slowed compared to the last three months. Still, it continued to increase at a high level of 1.03 percent," the central bank noted.

The report showed the main upward trend in inflation continued and also indicated the annual inflation of the group of main goods in April climbed to 11.1 percent with an increase of 1.06 points. "The prices of durable consumer goods that were increased by the delayed effect of the devaluation of the Turkish lira were at the forefront. While the upward trend slowed in the prices of automobile and white appliances, furniture prices considerably increased by 3.41 percent," the report said.