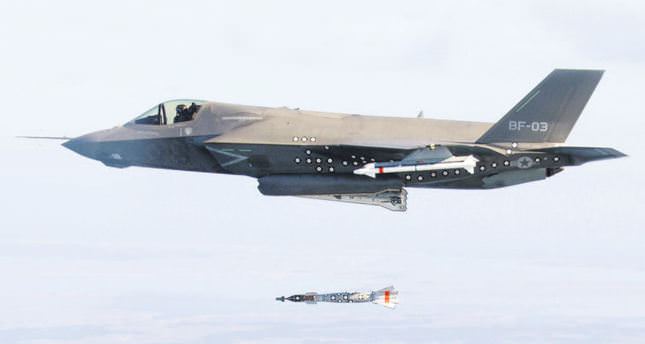 by Ali Ünal May 08, 2014 12:00 am
ANKARA — Turkey's ultimate decision-maker on procurement, the Defense Industry Executive Committee, announced late Tuesday that Turkey has committed to buying two F-35A Joint Strike Fighter (JSF) jets as part of an order expected to be consummated in 2016. The committee chaired by Prime Minister Recep Tayyip Erdoğan and with the Chief of General Staff and the Minister of National Defense also announced that the country still planned to buy 100 of the advanced jets.

Regarding the announcement, the Undersecretariat for the Defense Industry (SSM) remarked that Turkey has been a consortium partner in the JSF Program since the Concept Demonstration Phase in 1999 with the decision of the committee; the SSM has been tasked to order the first two F-35A aircraft in order to meet the Next Generation fighter requirement of the Turkish Air Force. "Up until now, the JSF Program has been followed closely, and our support to the program continues as strong as ever.

In this context, Turkey continues her forecast acquisition of 100 F-35A aircraft as planned and declared previously," the SSM also stated.
The F-35 is descended from the X-35, a product of the Joint Strike Fighter (JSF) program, and it's a "fifth generation" fighter that has been dubbed a flying computer, with a highly sophisticated radar system that gives the pilot a 360-degree vision over a massive area and allows him to identify and destroy distant targets in any direction. The U.S., U.K., Italy, Australia, Canada, Norway, Denmark, the Netherlands, and Turkey are participants in the active development of the JSF program. A few weeks prior to Turkey's decision, Australia announced that it had committed to buying a total of 72 F-35 Joint Strike Fighters, down from a 2009 plan to purchase about 100. Moreover, South Korea's arms procurement agency also announced in March that it would buy 40 Lockheed F-35 fighter jets. In addition, the U.S.
Air Force is also expected to reach an agreement with both Lockheed Martin Corp and engine-maker Pratt & Whitney by the end of May for the next order of fighter planes.

Defense industry expert Arda Mevlütoğlu defines the JSF project as a very ambitious and complex project. According to the expert, the reason for this complexity is twofold: "The project aims to develop an aircraft family for three different services (hence the "Jointness") and incorporates a whole new generation of technologies in airframe design, manufacturing, avionics and weapons systems. These factors caused significant delays and cost overruns in the program. The JSF represents a new paradigm in air warfare and multinational military operations." On the other hand, Mevlütoğlu also drew attention to the high cost of the project: "These developments come with a huge price tag. It can be considered as a "good" aircraft of a "bad" project. The network centric combat capabilities of the JSF are state-of-the-art and beyond any contemporary combat aircraft; however, the overall program is certainly not a success from budget, timeframe and logistics points of view."