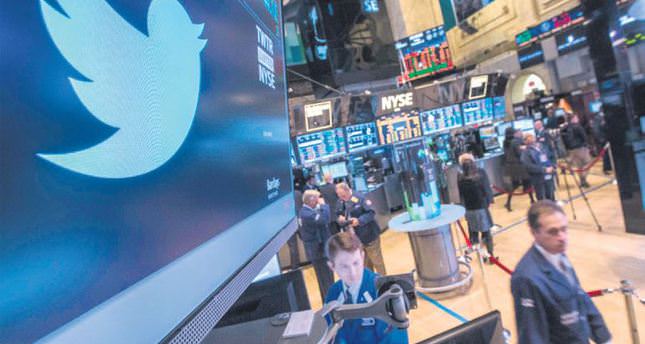 NEW YORK — Shares of Twitter Inc sank 18 percent to a new low in frenzied trading on Tuesday, wiping out more than $4 billion (TL 8.3 billion) of its market value, as early investors sold stock in the messaging service for the first time after a six-month "lock-up" expired.

The stock closed at $31.85 (TL 66) on the New York Stock Exchange, as losses deepened late in the session to the lowest since its debut on November 7 at $37. On a consolidated basis, more than 130 million shares changed hands - 10 times the daily average volume for the last 50 days. The lockup agreement that expired this week applied to about 470 million shares, or 82 percent of Twitter's equity, held by insiders, venture capitalists and other investors. Twitter allowed one batch of shares to be sold in February, but that lockup governed only about 10 million shares, most of which were held by non-executive employees. "The move is bigger than expected and is indicative of the negative investor sentiment towards Twitter right now," Atlantic Equities analyst James Cordwell told Reuters. Tuesday's reaction to Twitter's lock-up expiry was in sharp contrast to that of Facebook Inc in late 2012.

Facebook shares jumped 13 percent on November 14 that year, when its lock-up expiry of roughly 800 million shares did not trigger an immediate wave of insider selling. Twitter's shares have been trading at all-time lows since April 29, when the company disclosed sagging usage metrics. Indeed, concerns about user growth and engagement levels have wiped out about half of Twitter's market value, more than $18 billion, since late December, even as it has hit revenue targets in the two quarters since it went public at $26 a share. The stock does not look cheap either, despite the declines. Before Tuesday's selloff, Twitter shares were trading at 323 times forward earnings per share, according to Thomson Reuters StarMine.

Facebook trades at about 39 times. "I am starting to think that sentiment might have got too negative, but I don't see anything that can turn this around in the near term,"

Cordwell said. The largest holder of Twitter shares, private equity firm Rizvi Traverse, had no intention of selling when the lockup expired, a spokesman for the firm said on Friday. Rizvi Traverse, which owns about 85.2 million Twitter shares, could not be reached for comment on Tuesday. Lowercase Capital, which also holds a significant stake in Twitter, said Monday it had no intention of selling its shares. Twitter co-founders Jack Dorsey and Evan Williams and Chief Executive Dick Costolo said in April they did not plan to sell shares after the restrictions were lifted. Venture capital firm Benchmark, which holds a roughly 6 percent stake, has also said it would not sell its stake. But other major shareholders could see an opportunity to cash out, given that none of Twitter's insiders sold their shares during the initial public offering. Large shareholders include venture capital firms Union Square Ventures and Spark Capital. Spark declined to comment, while Union Square Ventures could not be immediately reached. Many tech companies have a lock-up clause to prevent holders from flooding the market as soon as the company goes public.