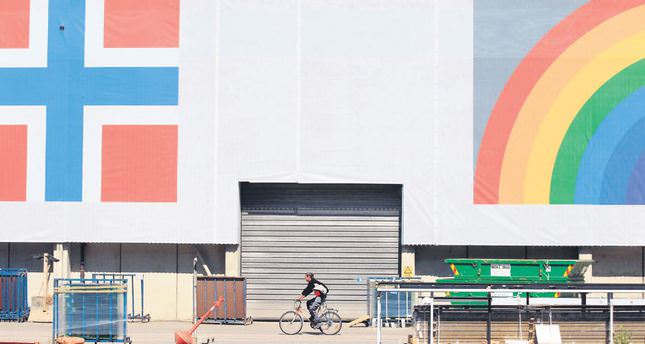 Norway is affected by the "curse of oil," huge wealth that brings unhealthy dependency. As oil investments fall, high costs deter growth. This decline will be cushioned by $860 billion saved from oil receipts

OSLO — Norway's energy boom is tailing off years ahead of expectations, exposing an economy unprepared for life after oil and threatening the long-term viability of the world's most generous welfare model. High spending within the sector has pushed up wages and other costs to unsustainable levels, not just for the oil and gas industry but for all sectors, and that is now acting as a drag on further energy investment. Norwegian firms outside oil have struggled to pick up the slack in what has been, for at least a decade, almost a single-track economy. How Norway handles this "curse of oil" - huge wealth that bring unhealthy dependency in its train - may hold lessons.

Norway had the foresight to put aside a massive $860 billion rainy-day cash pile, or $170,000 per man, woman and child. It also has huge budget surpluses, a top-notch AAA credit rating and low unemployment, so tangible decline is not imminent. But costs have soared, non-oil exporters are struggling, the government is spending $20 billion more oil money this year than in 2007 and the generous welfare model, which depends on a steady flow of oil tax revenue may not be preparing Norwegians for tougher times. "In Norway, job security seems to be taken for granted, almost like it's a human right to have a job," says Hans Petter Havdal, CEO of car-parts maker Kongsberg Automotive.

Kongsberg Automotive has only 5 percent of its workers left in Norway, having moved jobs to places like Mexico, China and the United States, and keeping only high-tech, automated functions at home. It says it is struggling with high labour costs and even problems such as excessive sick leave. "It's a bit discouraging that the sick leave in Norway is twice the level of other plants," Havdal said. "That is to me an indication that something is not as it should be."

With per capita GDP around $100,000, the Norwegian lifestyle has become such that the work week averages less than 33 hours, one of the lowest in the world, and while unemployment is low, there is large underemployment, made possible by benefits. In 2012, a new word entered the Norwegian lexicon - to "nave", or live off benefits from welfare agency NAV. "Approximately 600,000 Norwegians ... who should be part of the labour force are outside the labour force, because of welfare, pension issues," says Siv Jensen, the finance minister. Company executives and some government officials say Norway needs to limit wage increases to productivity, limit oil cost growth, cut taxes like neighbours have done and spend less of the oil money. Some say it should even depreciate its currency.

The fortunes of the oil industry, which accounts for a fifth of Norway's economy, have shifted abruptly as the global oil sector slammed on the brakes. Costs are spiking and capital spending has been so high that energy firms are selling assets to pay dividends. With oil prices seen falling this year and next, appetite for capital expenditure is low. "The boom is probably over. But we're not looking at a steep decline in investment or production," says oil minister Tord Lien. "The costs are rising too high and too fast.

The Norwegian costs have risen a little bit more than elsewhere." Shell has called off a multi-billion dollar gas project that was seen as a step towards platform-free offshore production after costs on the pilot project hit seven times the initial estimate. It would have placed all equipment on the seabed, including compression, and would have powered it from the shore, a huge technological step.

Statoil, the state-owned national champion, has slashed spending, eliminating advanced projects like an Arctic rig that would have been able to operate in two-metre thick ice.

Norway is the world's seventh biggest oil exporter, and it supplies a fifth of the European Union's gas, a critical position as tensions with Moscow over Ukraine raise concerns about Russian supplies. It also boasts the world's highest GDP per hour worked, according to the OECD, but labour productivity has declined since 2007, and since 2000 its unit labour cost has risen around six times faster than in Germany. Handelsbanken economist Knut Anton Mork said Norway must act if it is to avoid decline. Neighbour Sweden, meanwhile, cut sickness and unemployment benefits and lowered income, wealth and corporate taxes. Its tax burden has fallen by four percentage points of gross domestic product, now making it lower than France. But such wage adjustment in Norway is unlikely in the near term, and unions dispute that the country has a competitiveness problem. Industrial workers nearly went on strike in April until last-minute concessions.

Knut Sunde, director of employer interest group Area Trade and Industrial Policy, also sees little chance of much change: "It's a high-cost country and will always be, so there's no dreaming about ever coming back to the good old days when Sweden was expensive and Norway was cheap. We'll never go back."