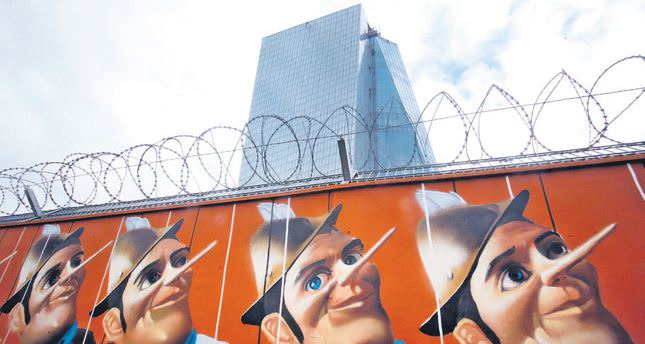 The ECB has kept its benchmark interest rate at a record low of 0.25 percent. Persistently low inflation across the eurozone-bloc has prompted growing calls that the bank should raise rates to head off deflation risks

The European Central Bank has left its benchmark interest rate unchanged at a record low of 0.25 percent as economic data suggest the 18-country eurozone's recovery is gaining strength. The bank's 24-member rate-setting council also held off on any other types of stimulus at its monthly policy meeting yesterday. A rate cut could give growth a small boost in theory by lowering borrowing costs for banks and companies. It could also help lower the euro, which is near a 2.5 year high against the dollar at around $1.39 (TL 2.88). A weaker euro would help exporters and boost inflation, which at 0.7 percent is well under the bank's 2 percent goal. Surveys and other indicators suggest the economy is already picking up steam. The European Commission, the EU's executive arm, predicts 1.2 percent growth this year, though inflation is expected to remain weak for some time.

Low inflation makes it harder for people and governments to reduce debt. There have also been worries about deflation, an extended drop in prices that can cripple growth by pushing consumers to delay purchases in hopes of bargains. Investors are waiting to hear ECB President Mario Draghi give his outlook at a post-decision news conference. Draghi has emphasized that the bank is ready to take action in case the economic outlook worsens. A cut in the benchmark rate would lower the cost to banks of borrowing money from the ECB and from other banks, and in theory they could pass that lower rate on to business and consumer borrowers. But that might only have a small effect. Rates are already very low, and some banks are not passing on lower rates because they have financial troubles themselves. Analysts think the ECB might take other steps to boost inflation.

That could include cutting to negative the interest rate paid on money banks deposit at the ECB, which could push them to lend and help lower the euro further.

The ECB's could also start buying bonds in the secondary market to boost the supply of money in the economy and drive down longer-term rates. The U.S. Fed, Bank of Japan and Bank of England have all done that. But that step, though permitted by the ECB's mandate, faces serious obstacles given there are 18 different government bond markets in the eurozone. Separately, Bank of England policymakers have also kept interest rates steady and declined to pump more money into Britain's economy amid signals of recovery.

The Monetary Policy Committee kept the benchmark interest rate at a record low 0.5 percent and voted against boosting the monetary stimulus program. The bank has pumped 375 billion pounds ($600 billion) into the economy through its bond-buying program over the past five years. The decision announced yesterday was widely expected.

Britain's economy is one of the fastest- growing among developed countries. ıt expanded by 0.8 percent in the first quarter compared with the previous three-month period.
RELATED TOPICS