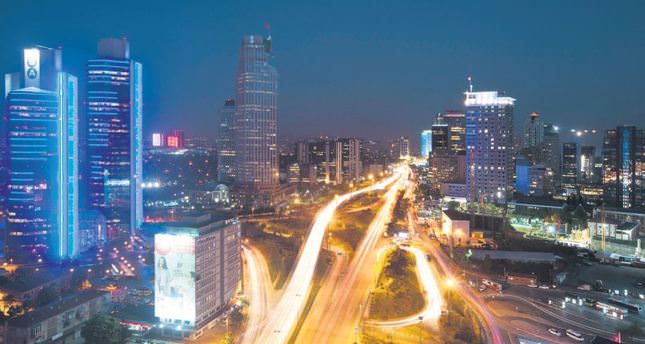 Domestic reforms and global financial and political stability are key for Turkey to achieve its economic aims by 2023, as set by the AK Party government

ISTANBUL — The year 2023 is of great significance for Turkey's ruling Justice and Development Party (AK Party), and not just because it marks the centennial of the establishment of the Republic of Turkey. 2023 is the deadline for ambitious economic targets set by the government to take Turkey to the level of developed world economies. While redefining the vision of Turkey, the AK Party introduced its noteworthy strategic plan in 2008 under the title "2023 Targets." However, experts emphasize that global economic trends may trip up Turkey on its way to achieving these economic targets for 2023. The 2023 vision focuses on making Turkey one of the 10 biggest economies in the world from its current ranking of 16th.

Sustainable economic growth is the key in reaching the 2023 targets. For that reason, the Turkish government has developed several strategies that include increasing per capita income to $25,000 and annual exports to $500 billion, reducing unemployment to 5 percent and building export-oriented structures in the Turkish defense industry.

According to a 2009 report initiated by the Ministry of Economy and Turkish Exporters Assembly titled "Turkish Exports Strategy for 2023," the decision was made that by 2023 Turkey would reach $500 billion in export volume with an average of 12 percent annual increase in exports. In order to achieve the stated goals in export performance, the government has made some considerable improvements. "Basic elements of this strategy are shifting production from low technology sectors to high value added areas and achieving new investments in high-tech sectors," the report states. Other strategies in the report include a "modern and flexible export structure, which is based on advanced technology and R&D," which needs to be built by 2023 "to respond to the demands of today's and the future's business environment."

Regarding economic growth as a key factor in the 2023 targets, it is important to note that the impact of global economic trends on the Turkish economy is inevitable. There are some major obstacles that could undermine the 2023 government vision. The ongoing tension between Russia and Ukraine and the brutal civil war in Syria have negatively affected the global economy. In addition, the upcoming Turkish presidential elections in August 2014 show that political stability should be preserved in order to achieve gradual economic growth.

The latest local election held in March proves that the Turkish economy favors political stability, followed by sudden economic recovery. Turkish Deputy Prime Minister Ali Babacan stated at a ministerial council meeting of the Organization for Economic Co-operation and Development (OECD) on May 6 that his concerns over global economic growth for the next decade signal that the Turkish economy would apparently deal with gradual growth for the next decade. He also leveled harsh criticism at groups who oppose the 2023 targets.

Economists who spoke to Daily Sabah highlighted that the current global industrial and financial atmosphere can prevent Turkey from achieving its 2023 economic aims. Speaking to Daily Sabah, Dr. Burak Arzova noted that Turkey's 2023 economic aims are very difficult to achieve when the global monetary tightening and low inflation crisis in Europe are taken into account. "When Turkey set the 2023 goals several years ago, the world was surviving a brutal economic crisis and global recovery expectations encouraged the Turkish government to set those aims. However, economic stagnation in Europe, which is Turkey's largest economic partner, negatively affected Turkey's exports and growth," Arzova said. He added that even if Turkey's economic indicators imply slight improvements in industrial activities and existing financial stability, Turkey needs numerous economic reforms to provide sustainable growth rates. However, Arzova stressed that Turkey has been focused on political issues much more than economic ones. "Businessmen, economists and economy policy makers are aware of the need for reforms, but Turkey's political agenda always surpasses the economic agenda," the economist told Daily Sabah. Addressing Deputy Prime Minister Ali Babacan's statements, Arzova highlighted the need for Turkey to implement more democratic reforms to achieve economic targets.

Veteran economist Hikmet Baydar also commented on the issue to Daily Sabah. He noted that particularly after the end of the Cold War, Turkey has become integrated into the global economy meaning economic developments in Turkey cannot be separated from global trends. "The U.S. economy posed an unexpected improvement in recent months, which causes large funds to direct in that country. This situation increases the pressure
on emerging economies like Turkey," he said.