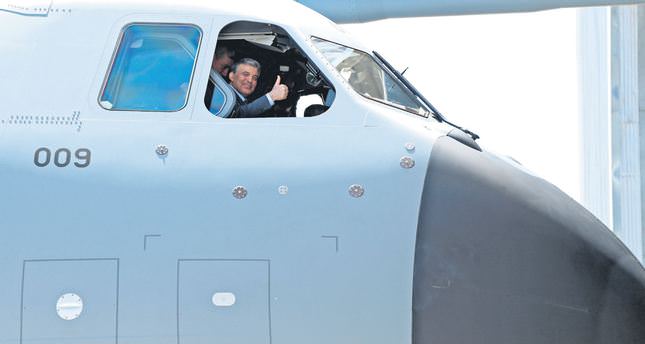 ANKARA — Turkey's first A400M aircraft, regarded as the most developed military transport aircraft, was delivered to the Turkish Armed Forces (TSK) yesterday. Speaking at the delivery ceremony, Turkish President Abdullah Gül noted that after the cold war ended, states had to revise their security risk and threat perception. "In this context, flexible and easily mobilized troops are as necessary as the conventional ones," Gül said, adding that Turkey built aircrafts long before manufacturing automobiles. "Even though Turkey stopped doing that, now it became a co-producer of the most developed aircrafts and fighter jets."

In his speech, Gül highlighted that many countries had to cut their defense industry budgets due to the recent global economic crisis, however Turkey vigorously endeavors to cover the TSK's needs. Noting that Turkey is located in a region with a number of military and political crises, Gül said, "Acquiring such aircrafts is highly strategic... Turkey tries to avoid wars, but we have to show our readiness for a war to establish peace." In 1998, Turkey joined the A400M project, which is jointly conducted by Germany, France, Spain, England, Belgium and Luxemburg. The contract signed between the partner countries and Airbus on May 27, 2003 dictates that 170 A400M aircrafts be manufactured with 10 of them being delivered to Turkey. Last month, Airbus posted a statement warning Turkey that it wouldn't receive the aircraft on time, which was February. In response to Airbus' statement, Turkish authorities stated to the press that unless Airbus fulfills its contractual obligations it will not accept the delivery. After a six-month delay, Turkey penalized Airbus and received some spare parts at no charge.

In addition, TEI produced the engine mount surrounding, support bars of the propeller pitch box and exhaust cones. The A400M transport aircraft enables logistic support for especially long distances. It weighs 76.5 tons and is able to carry 37 tons of load. In addition, the craft has a capacity to carry 116 soldiers, 66 stretchers and 25 medics. The aircraft will also be used in the transport of vehicles like helicopters, vans and jeeps. A400M can fly up to 9,000 kilometers without refueling.

Turkey's first strategic transportation craft, the A400M is the first international aircraft project to be designed and manufactured by Turkish engineers. Manufactured with high-end aerial technology, the aircraft will be serving in the 221st Fleet of Kayseri 12th Air Transportation Main Base Command.