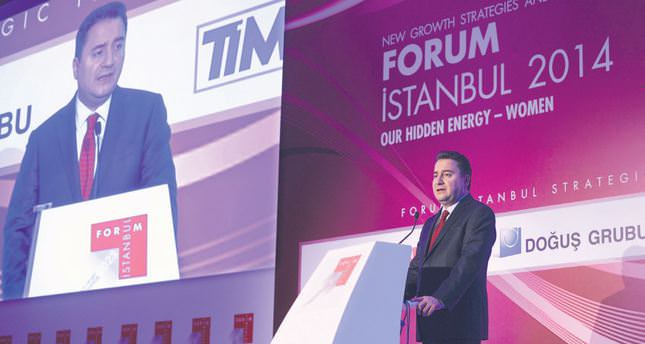 Deputy PM noted that the Turkish economy went through a considerable transformation in the last 11-12 years and reforms in the areas of banking, social security and public finance protected the economy against crisis

He also underlined Turkey's economic, political and juridical reform needs. In his speech, Babacan noted that it is commonly said that unpleasant times fell behind for the first time since 2008 in the global economy. "It was not very clear till now. But now, we see former worries fading away gradually.

There are still some problems in developed economies. The potential growth in both developed and developing countries returned to the situation before the crisis. The inequality of income distribution is to be paid the biggest attention," he said.

Babacan also remarked that the Turkish economy went through a considerable transformation in the last 11-12 years and that reforms in the areas of banking, social security, health and public finance that were made before the crisis protected the economy to a remarkable extent. Turkey is the country that reduces the Gini coefficient, a measure of statistical dispersion intended to represent the income distribution of a nation's residents, most rapidly among the member countries of OECD, Babacan stressed. "Quite large parts of society feel the influence of growth," the prime minister said.

Stating that the last year was not an easy one for Turkey, Babacan continued: "Starting from May 2013, the global economic conjuncture and the weak growth in Europe lasted throughout 2013. Recovery can only be possible in 2014. We went through the Gezi incidents; besides, the incidents in Syria and Iraq were extremely negative. We experienced and still experience the Dec. 17 process. Despite all these negative incidents, Turkey fulfilled the growth target of 4 percent. This is not to be underrated."

Babacan highlighted that the two most important issues affecting the economy are education and law. "Education is the most vital mechanism that enables individuals to produce added value. We saw in the process of Dec. 17 that judicial independence is highly important. The impartial functioning of the judiciary is also of remarkable importance. If the judiciary uses its zone of independence in a partial way, above all, adjudications are made under the influence of various structures; this means a catastrophe for the country. If a single prosecutor, a judge and some police officers work with orders from various channels while declaring to work independently; dozens of businessmen are detained in a night's time; assets of billions of dollars can be frozen; all these constitute huge destruction in terms of reliability.

That is why we have always stressed that unless we solve problems in the areas of law and jurisdiction, it is really difficult for Turkey to achieve the targets for 2023 and establish an advanced democracy. We will never allow external structures in the state,"
Babacan remarked.

Babacan emphasized that the rule of law applies for everybody and that universal legal norms are to be taken account of. "Turkey has already made its own way in this direction as a state policy. We hold onto the Council of Europe and the EU, thus taking reference in terms of universal law. With an eye to this reference, ensuring legal security in Turkey is one of the most significant agenda items from now on," he remarked.

Babacan indicated that a market economy based on transparency and accountability that does not allow arbitrariness is required and concluded, "The real economic potential of Turkey will only be realized with women getting more active in business, social life and politics."
RELATED TOPICS