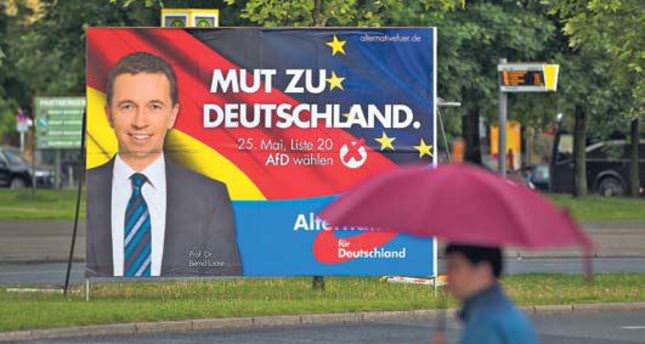 Established in 2013, the Alternative for Germany is calling for the dissolution of the single currency system and a return to the deutschmark. But its growing support over the past year has been creating worries in Germany

BERLIN — "The Euro crisis worries me a lot. It's not over," Kathrin Rommel tells a rally for the eurosceptic Alternative for Germany (AfD) as it kicks off its European election campaign. Waving a placard that reads "Stop running up debts for our children," the 47-year-old with long brown hair and pink highlights is touching on a concern shared by many Germans. Several hundred people have gathered outside Cologne Cathedral in western Germany to support the fledgling AfD, which has honed in on opposition to EU bailouts. "Chancellor Angela Merkel wants to save the euro with little regard to the cost it will have," says the AfD's top candidate, Bernd Lucke, an economics professor from the northern port city of Hamburg, to enthusiastic applause. The AfD failed to make a significant impact on September's general election in Europe's top economy, falling just shy of the 5 percent threshold. But its growing support, coming out of nowhere over the past year, has been a surprise in a country that has arguably benefited the most from European integration. It looks likely to win seats in the EU vote later this month, given the proportional representation system and a new ruling from Germany's top court that scrapped an electoral hurdle for small parties. The Ukraine crisis has chased Europe's financial woes from the headlines of late, while there have been signs of renewed confidence in Greece and other crisis-hit parts of the periphery. But Germans continue to worry about the future. "There's a lot of uncertainty due to the ageing of the population.

People are concerned about their retirement and think they're going to have to work longer," said Andrea Roemmele, a political scientist at the Herthie School of Governance in Berlin. A poll in the German daily Bild said recently that four out of five Germans believed the financial and debt turmoil that brought the eurozone to its knees hadn't been conquered. In Cologne, AfD supporters take aim at low interest rates set by the European Central Bank which they criticize for yielding low returns for German savers. "Savers have lost their illusions. They get practically no interest any more on money they've put in the bank," charged Lucke.

Standing, listening and applauding in the crowd was economics student Alexander Duesing. Although he was just eight years old when the euro replaced the deutschmark, he has decided to back the AfD in the European parliamentary elections because he says Germany faces a "threat" from heavily indebted southern European nations.

The AfD now boasts 17,000 members from diverse backgrounds, including the former president of the Federation of German Industries, Hans-Olaf Henkel, who had once supported the euro's introduction. The party has also been able to benefit from the absence of a far-right option, which has been the main source of euroscepticism in other countries, but which has little ballot-box appeal in a country still marked by its painful Nazi past. The AfD has vowed to stay away from anti-EU partners. "If we enter the European parliament we're certainly not going to approach the populist right-wing parties,"Lucke said. Pollsters predict the AfD will score between 5 and 6 percent in the EU election.
Last Update: May 15, 2014 1:45 am
RELATED TOPICS