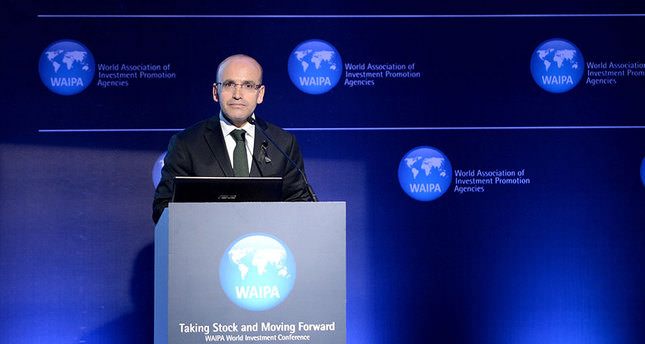 Speaking at Turkey's Investment Summit held in Istanbul on Tuesday, Şimşek said the number of international companies operating in Turkey has increased from 3,212 in 2002 to 37,737 in 2014.

The summit, organized by the Sovereign Wealth Fund Institute in partnership with Prime Ministry's Investment Support and Promotion Agency, brought together a diverse global audience of institutional investors, asset managers, industry leaders and policy makers to share ideas about the vast investment opportunities Turkey has to offer.

Stressing the increasing importance of Istanbul as a financial center, Şimşek said, "Until a few years ago, Istanbul ranked 72nd among 80 global finance centers," he said. "This year it came 47th, and we aim to be in the top 20 by 2023."

"Political stability in a country plays a key role in terms of prosperity," Şimşek said, adding, "We do not foresee any negativity in the August's presidential elections and in Parliamentary elections in 2015."

Underlining Turkey has been performing well recently when compared to many developing countries, Şimşek said Turkey had recovered from the global financial crisis relatively quickly.

"We have created a record level of employment despite the increase in the labour force participation rate. At a time when over two million people have lost work in Europe, over five million people found employment in Turkey."

Şimşek said the unemployment rate is stable at nine percent, adding, "however, the high rate of inflation is an important problem that we should focus on, although it is not uncontrolled."

In the last 10 years, Turkey has seen a significant decrease in inflation rates, which Turkey's Central Bank expects at 7.6 per cent by the end of 2014.

"Another problem for Turkey is the current account deficit," Şimşek said. "There are some clear reasons lying behind that problem, such as the economic crisis in Europe, which is our biggest trading partner."

Şimşek said the Arab spring had some negative effects on the economy, through harm to Turkey's trade with Middle East countries.
Underlining what Şimşek describes as a significant decrease in public debt, a "strong" banking sector, and "low budget deficit when compared to EU and many developing countries," he said Turkey expects high growth in many fields.

Economics Minister Nihat Zeybekçi quoted Napoleon Bonaparte saying, "If the Earth were a single state, Constantinople would be its capital."

"Turkey has much to tell, and is full of great success stories," Zeybekçi said. Claiming that Turkey's trading volume had increased a hundredfold in over three decades, he said: "The trading volume was only $4.5 billion 33 years ago, and now in the first quarter of 2014, this has reached over $400 billion."

Speaking about Turkey's projections towards 2023, Zeybekçi said income per capita will reach over $25,000, while exports will increase to 500 billion dollars.

Zeybekçi said Turkey plans to be among the first three countries for tourism and that they will try hard to develop bilateral cooperation.