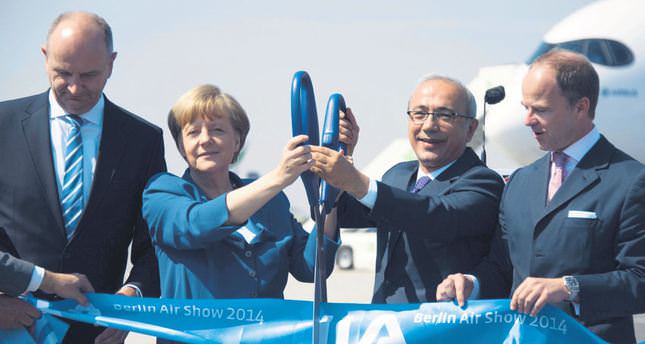 by AA May 21, 2014 12:00 am
BERLIN — A day after German Economy Minister Sigmar Gabriel ordered a ban on the sale of surveillance technology to Turkey, his boss, Chancellor Angela Merkel, joined Turkey's Transportation Minister Lütfi Elvan in opening the Berlin Air Show.

Germany's Vice Chancellor and Minister of Economy Sigmar Gabriel announced yesterday that Berlin will cease the export of surveillance technology to a number of countries, including Turkey and Russia. The minister said that customs were ordered to conduct firmer checks on related products and said, "We will not permit this anymore."

On the same day German Chancellor Angela Merkel opened an aerospace and air defense industry technology fair alongside Lütfi Elvan, the Turkish Minister of Transport, Maritime and Communication in Berlin. Turkey is a partner country in the fair this year. Turkish authorities and media were quick to note what they claim are the inconsistent positions of the German chancellor and vice chancellor. In his speech, Gabriel said that the export of surveillance technology will be banned until a more solid export control system is put into effect in the wider EU. Deutsche Welle noted that new regulations are expected to be announced by the European Commission in the fall about the exports of surveillance technologies.

The minister said that German companies that produce such technology were warned by the German government not to trade with oppressive regimes in April. Gabriel did not release the list of countries to which exports are banned, however, at the request of journalists from NDR, WDR and Süddeutsche Zeitung, he declared that NATO member Turkey and Russia are among the countries.

Chairman of the Social Democratic Party in Germany Sigmar Gabriel said that authoritarian regimes apply pressure on people not only through brute force but also Internet surveillance technologies. "Supporters of Internet freedom are not supposed to deliver corresponding technology to the hands of such regimes which monitor Internet users and thus violate the most basic human rights," Gabriel remarked.According to Deutsche Welle, Germany banned sales of such products to Syria and Iran in 2012, though any other bans were not imposed at that time. While Gabriel emphasizing that Germany will cease exports of some defense and security equipment, Elvan declared that Turkey is designated this year as a "partner country" at the International Air and Space Show, which he regards as a sign of improving cooperation between Turkey and Germany. Elvan said about the fair, "It is possible to see all companies in the world and in the aviation sector. Germany declared Turkey a partner country. It is proud for Turkey.

We will make the opening with Chancellor Merkel." Elvan stressed that Turkey's target is to increase the proportion of domestic contribution. "We have scaled up R&D investments for the defense industry. We have an export figure of nearly 1.2 billion euros [TL 2.53 billion]. Domestic participation in the area of defense rose from 25 percent to 56 percent, which will increase even more. Foreign companies are greatly interested in Turkey.

Roketsan and Aselsan will sign agreements with German companies tomorrow. This fair is very important in terms of cooperation. We have a business volume of 4 billion euros with Germany. We want investments in Turkey," Elvan concluded.
RELATED TOPICS