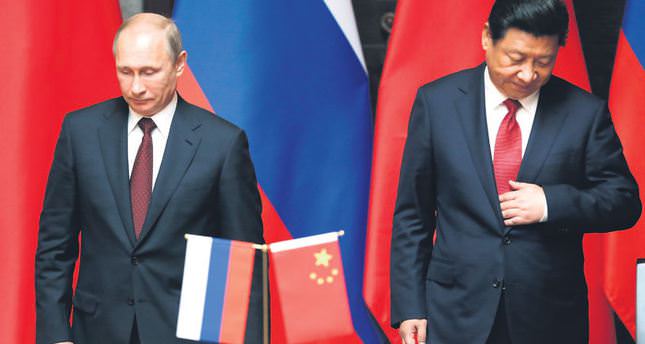 In response to Western sanctions over the crisis in Ukraine, Russian President Vladimir Putin is aiming to export $400 billion worth of natural gas to energy-hungry China as his country diversifies from the European market

BEIJING — Russian President Vladimir Putin has begun a two-day visit to China and expectations have run high in recent months for both parties to ink a gas supply contract for Gazprom to supply the China National Petroleum Corp with 38 billion cubic meters of natural gas per year for 30 years. Analysts have estimated the deal to be worth about $400 billion (TL 844 billion).

Chinese President Xi Jinping and Putin pledged yesterday to build ties between the two U.N. Security Council members, who both face international criticism and are dealing with territorial disputes.

After more than a decade of false starts and price haggling, the crisis in Ukraine, which has left European countries looking at ways to reduce dependency on Russian natural gas supplies, Beijing's drive to switch from coal use to cleaner fuels, have finally created a convergence of interests.

Chinese state media on Monday quoted Putin as saying that preparations for a gas deal had entered "the final phase," while Russia's state-controlled Gazprom said over the weekend that it was still "one digit" away from a deal. But on Monday, sources close to Gazprom and in the gas industry said the Russian company wanted China to pay $25 billion to secure future gas supplies, which should start in 2018 at a yearly rate of 38 billion cubic meters. China has so far not been willing to commit, concerned that other suppliers would seek similar deals. The failure to reach a deal so far, despite talks of a narrowing price gap, suggests China is driving a hard bargain.

Plans call for building a pipeline to link China's northeast to a line that carries gas from western Siberia to the Pacific port of Vladivostok. A gas deal would mean China would be in a "de facto alliance with Russia," said Vasily Kashin, a China expert at the Center for Analysis of Strategies and Technologies in Moscow. In exchange, Moscow might lift restrictions on Chinese investment in Russia and on exports of military technology, Kashin said. "In the more distant future, full military alliance cannot be excluded," Kashin said. "It will, however, take years for China to start playing in the Russian economy a role comparable to that of the EU," he said. "After that happens, both China and Russia will be much less vulnerable to any potential Western pressure and that, of course, will affect the foreign policy of both these countries."

The two countries developed a strategic partnership after the 1991 Soviet collapse, including close political, economic and military ties in a shared aspiration to counter U.S. influence, especially in Central Asia. Russia and China said in a joint statement that they will strengthen cooperation in the energy sector and infrastructure development in Russia. Both countries will also step up financial cooperation and will look to increase trade in the ruble and the yuan. China's Xi has underscored the importance of ties with Russia, and Moscow was the first capital he visited after assuming the presidency last year. Xi also attended the Winter Olympics in Sochi at Putin's invitation. But, while the two see eye-to-eye on many international diplomatic issues, including the conflict in Syria, and generally vote as one on the U.N. Security Council, China has not been so willing to support Russia on Ukraine. Both countries however called for more regional and political cooperation on Ukraine in a joint statement. In a joint statement after their talks, Putin and Xi said the two sides voiced serious concerns over the political crisis in Ukraine, and urged Ukrainian regions, people and political groups to start "broad nationwide talks," according to Russian state news agency ITAR-Tass. Their statement also said that any external attempts to forcibly interfere in Syria would be unacceptable.

Meanwhile the Chinese and Russian leaders will today attend the formal opening of the Conference on Interaction and Confidence Building Measures in Asia, a little-known Asian security forum, at a time when China has locked horns with its Asian neighbors over disputed territory.

Turkish Foreign Minister Ahmet Davutoglu will represent Turkey on behalf of President Abdullah Gül, who canceled his trip due to the deadly mine blast in Turkey's western town of Soma.

China and Russia also started a new round of joint naval exercises off Shanghai yesterday. President Xi Jinping launched the drills at a ceremony in a room lined with officers of both navies in white dress uniform, with his Russian counterpart Vladimir Putin looking on, state broadcaster CCTV showed. Beijing says a combined 14 surface ships from both countries will take part in the week-long drills in the East China Sea which are aimed at a "maritime threat" and include live-fire exercises.

The exercises show "the unshakable determination and will of China and Russia to together face new threats and challenges to protect regional security and stability," Xi was quoted as saying by the governmentbacked China News Service. Putin said he hoped "the two militaries can strengthen cooperation under the new situation," it added. It is the third time in as many years that the two countries have held naval exercises near China's coast, according to state media.
Last Update: May 21, 2014 1:24 am
RELATED TOPICS