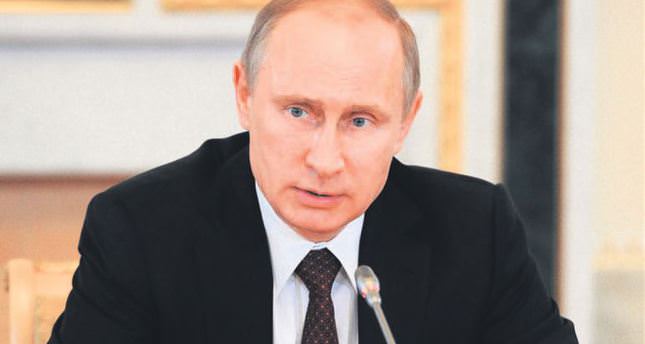 MOSCOW — Putin said in a speech that Russia would cut its dependence on energy exports. Analysts said he was trying to persuade the international community that Russia's economy could survive alone. Putin also said he was optimistic about resolving the Ukraine crisis. "Russia is trying to assert itself as an independent player," said Orysia Lutsevych, research fellow at Chatham House. He added that President Putin "really wants to assert himself in the neighborhood and he has to think about economic stability." Russia imports a lot of technology, especially in oil and gas exploration, and relies on access to finance in the West, she said.

The International Monetary Fund (IMF) predicts that the next quarter's figures will also show economic contraction, meaning the country is in recession. The IMF cut its 2014 growth forecast for Russia to 0.2 percent from 1.3 percent and said it expected the country's economy to grow by only 1 percent next year. The fund also forecast that $100 billion (TL 208 billion) would leave the country this year.

Russia itself has expressed concerns about investors moving money out of the country amid tensions and sanctions over its intervention in Ukraine. Its central bank said $64 billion had left the country in the first quarter of the year, more than the capital flight registered for the whole of 2013. The exit of investor money has partly been prompted by U.S. and EU sanctions targeting a number of Russian companies and high-profile business figures, including those close to Putin. In his speech, at an economic forum in St. Petersburg, Putin also accused the U.S. of wanting to have an advantage when trading with the EU. "Maybe our American friends, they are sophisticated guys, want to get a competitive advantage in their trade and economic relations over Europe," he said.

The sanctions may backfire on the West, said Mr. Putin. "In the modern, interconnected world, economic sanctions as an instrument of political pressure can have a boomerang effect and in the end they have an impact on the businesses and economies of the countries that initiated them."

Separately, the $400 billion gas deal Russia signed with China was a symbolic victory for Moscow as it is locked in a dispute with the West over Ukraine, but the scale of the deal is not as massive as it seems at first blush, according to analysts. The volumes to be shipped east won't cut Russia's dependence on selling gas to the West, nor would they lead to shortages in Europe.

Under the 30-year deal signed Wednesday with Russia's Gazprom, the company will begin supplying China's CNPC with up to 38 billion cubic meters of gas per year in 2018, with the agreement said to be worth some $400 billion overall. Russian President Vladimir Putin and Gazprom chief Alexei Miller didn't lose any time in hailing the agreement which is the largest in the state-controlled gas company's history. However analysts at Capital Economics said "the importance of the deal is largely symbolic." The Londonbased outfit said "the benefits to the Russian economy from the $400 billion deal are likely to be smaller than most seem to think."

First the sum will be spread out over 30 years, making it an additional $13 billion in exports that reached $593 billion last year. "Although this is significant, it is hardly a game changer," said Capital Economics. Analysts also pointed out that the amount of gas to be delivered to China, up to 38 billion cubic meters per year, is still far behind the 160 billion cubic meters it shipped to Europe last year.
RELATED TOPICS