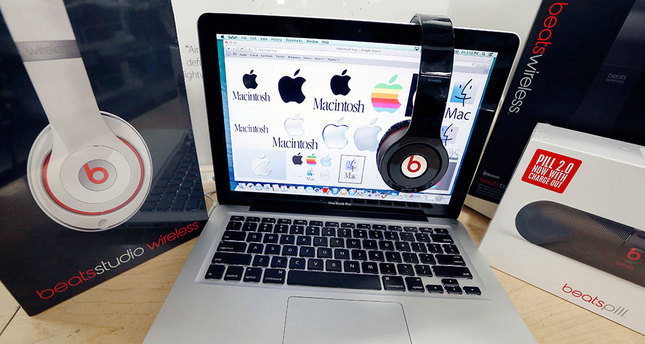 by Associated Press May 29, 2014 12:00 am
CUPERTINO, California — Apple is buying more flair, swagger and song-picking savvy with its $3 billion acquisition of Beats Electronics, a headphone and music streaming specialist founded by rapper Dr. Dre and Jimmy Iovine, one of the first recording executives to roll with the hip-hop culture.

Wednesday's announcement came nearly three weeks after deal negotiations were leaked to the media. It's by far the most expensive acquisition in Apple's 38-year history, a price that the company is paying to counter a threat posed to its iTunes store.

The price consists of $2.6 billion in cash and $400 million in Apple stock that will vest over an unspecified time period. The deal is expected to close before October.

With $1.1 billion in revenue last year, Beats is already making money and will boost Apple's earnings once the new fiscal year begins in October, Apple CEO Tim Cook said in an interview.

Iovine, 61, and Dre, 49, were the keys to the deal. They began working with Apple in the early days of its iTunes store and now will become key in Apple's music divisions, though Cook said their roles haven't been determined yet

"We have known these guys forever," Cook said of Iovine and Dre. "We've dated, we've gone steady and now we are getting married. This relationship started a decade ago, so we know there is an incredible cultural fit. These two guys have a very rare set of skills. It's like finding a particular grain of sand on the beach. It's that rare."

Cook indicated Beats' music streaming service was the main selling point in the deal, though the headphone line also is expected to continue growing, too.

Although he regards most technology companies as "culturally inept," Iovine believes Apple will empower Beats to realize its goals of improving the sound of digital music and creating playlists tailored for each subscriber.

"To complete our dream, we needed a company like (Apple)," Iovine said in an interview. "We couldn't finish this on our own."

The growing popularity of music streaming services such as Pandora and Spotify has been reducing sales of songs and albums, a business that iTunes has dominated for the past decade. U.S. sales of downloaded songs slipped 1 percent last year to $2.8 billion while streaming music revenue surged 39 percent to $1.4 billion, according to the Recording Industry Association of America.

Although Apple broke into streaming with the launch of iTunes Radio last September, the service has not been as popular or as lucrative as the company expected, according to two people familiar with the matter. The people were not authorized to speak publicly about the matter and spoke on condition of anonymity.

ITunes Radio has 40 million listeners and will continue as a free service with ads while Beats Music will try to tap into the more than 800 million iTunes accounts to sell more subscriptions to its customized service. Beats Music currently has more than 250,000 subscribers, Cook said. That's well below the more than 10 million paying customers that Spotify's streaming service boasts.

Apple is counting on the Beats acquisition to boost its cachet with teenagers and younger adults as it tries to remain a leader in digital music an industry that looks much different than when Apple reshaped the scene with the 2001 debut of the iPod.

"Apple suddenly has regained its cool," said Sony Music CEO Doug Morris, who was one of the first recording executives to embrace iTunes at Iovine's urging more than a decade ago.

Beats was founded in 2008 by Dr. Dre, whose real name is Andre Young, and Iovine, a longtime recording industry executive who is stepping down as chairman of Universal Music Group's Interscope Geffen A&M Records to join Apple. It now dominates the luxury headphone market. Its equipment is also a big seller in Apple's stores.

Operating from its Culver City, California, headquarters, Beats commands 62 percent of the $1 billion U.S. market for headphones priced above $100, according to NPD Group.

The purchase marks Apple CEO Tim Cook's biggest strategic break from the way the Cupertino, California, company was led under co-founder Steve Jobs, who died in October 2011. Jobs favored smaller acquisitions and didn't believe subscription music plans would be popular. Before Beats, Apple's biggest acquisition had been its $400 million purchase of NeXt Computer, a company that Jobs founded after being ousted from Apple in the 1980s.

Cook said he never considered what Jobs would have thought about the Beats' acquisition during the negotiations. Jobs "told me to do what was right," Cook said. "And I am 100 percent certain this is what is right. This is one of those things that we will look back upon and say it was meant to be."

Morris, who considers Iovine to be his best friend, believes Cook is making a smart move that will give Apple even more credibility in the music industry.

"It's a game changer because Jimmy is that kind of guy who can change a game," Morris said. "I am not saying he is Steve Jobs, but he is a guy with new ideas and he really knows how to build the bridge between music and technology."

But some analysts question whether Beats will be a good fit for Apple, which makes most of its money selling hardware such as iPhones and iPads.

Forrester Research analyst Frank Gillett says Apple would have been better off developing its own headphones in-house and expanding into music subscriptions through iTunes.

"It's hard to understand why Apple would have to spend $3 billion on a nascent streaming service and a line of bass-heavy headphones," Gillett says.

Yukari Iwatani Kane, the author of "Haunted Empire," an inside look at Apple since co-founder Jobs' death, also sees a disconnect.

"Culturally, Beats is the complete opposite of Apple," Kane says. "It's known for being loud and bold and in your face. It doesn't fit with Apple's understated, discerning brand."

Having visited Apple on a regular basis since he first met Jobs more than a decade ago, Iovine said he has no qualms about joining Apple.

"This is not a big company to us," Iovine said. "We can roller skate in the halls here. Dre and I have been working together for 22 years. We are not about to go somewhere where we are going to fall."

Dre was more sedate Wednesday than he was in a celebratory video posted online declaring him as hip-hop's first billionaire after news of the Apple talks leaked earlier this month. "To be able to do something that could potentially change the world, I'm thrilled."