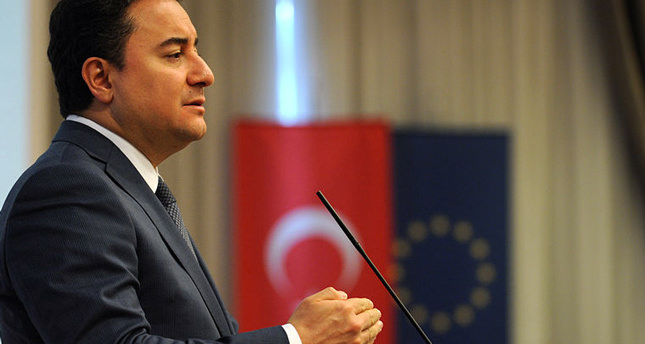 by Daily Sabah May 29, 2014 12:00 am
ANKARA — Ali Babacan, Turkey's deputy prime minister responsible for economic issues, on Wednesday praised the country's efforts over the last 11 years to ensure greater transparency and called for more.

Without ethics, there would be great economic, political and social cost in the country, said Babacan at a conference in Ankara, organized by the Council of Europe titled "Project on Consolidating Ethics in the Public Sector in Turkey."

A Transparency International report, released last week, shows that Turkey's position went from 65th out of 102 countries in the Corruption Perception Index in 2002 to 53rd out of 177 in 2013.

However, Transparency International warned Turkey about the fact that its judicial system lacked resources. The report added that the country needed stronger legislation, namely on accounting and auditing procedures.

"Our Prime Minister [Recep Tayyip Erdoğan] said, 'we will fight poverty and corruption in the country on the first day in government,' " said Babacan. "We have passed a lot of regulations. As a result, we can see that Turkey's ranking position against corruption improved."

"Fighting against corruption is important for Turkey's image and effect on foreign direct investment," added Stefano Manservisi, the EU's ambassador to Turkey.

The EU-financed "Ethics for the Prevention of Corruption in Turkey" project, implemented from December 2007 to November 2009, aims to better democracy and the rule of law by strengthening and improving ethics in preventing corruption in Turkey, in accordance with European and other international standards.