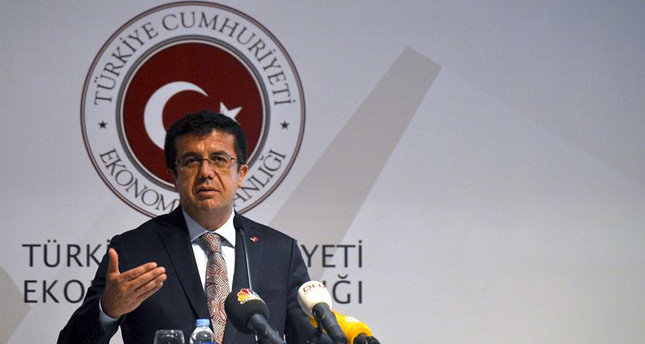 Speaking at "Turkey Innovation Week" event held by Turkey Exporters Assembly, Zeybekçi said that 2014 would be an enviable year and estimated that the year-end export volume would be at $166 billion with a 10 percent increase.

"Do not heed those that say we downgraded the 2014 growth prospect of Turkey. Growth in the first quarter of 2014 will be much better than the growth figure of the last quarter of 2013," he said.

After the anti-graft probe that was launched on 17 December last year and prior to 30 March local elections, international institutions such as Organization for Economic Co-operation and Development (OECD), International Monetary Fund (IMF), the World Bank and credit rating agencies have cut Turkey's 2014 growth prospects due to the persistent political turmoil affecting the economy.

Zeybekçi surmised that the growth figure of 2014's first quarter will be close to the annual average growth rate of 5.1 percent recorded between 2003 and 2012, saying "Turkey will hold 5.1 percent growth levels as a starting point this year."

He added that they expected the current account deficit, which is identified by many authorities as the "economy's achilles' heel," to be below $50 billion at the end of 2014 and a decline in the consumption of luxury products after the measures taken by government will be evident.