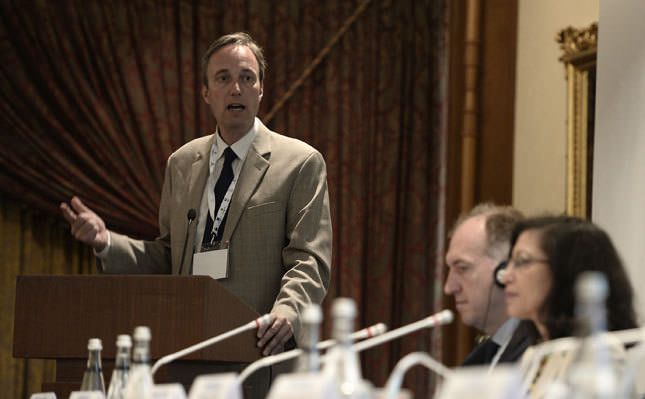 by Daily Sabah May 30, 2014 12:00 am
ISTANBUL — World Bank country director for Turkey Martin Raiser recently published an article titled "Trading Up to High Income: New Firms, New Products, New Markets," which focuses on Turkey's economic outlook and the role of exports in becoming a high-income society. In the article that was published on the World Bank's website, Raiser states that a competitive export sector is one of the key engines of a successful transition to high income.

He also noted that Turkish policy makers know the importance of exports for economic development well, and so a push for an increase in export competitiveness is at the forefront of their ambitious targets to get the country in the list of top 10 economies worldwide by 2023.
Raiser poses the question: What are the chances of success? In his article Raiser remarks that Turkey has been quite successful over the last decade. Using statistical data, Raiser shows that Turkey's exports during the 2000s grew 15.3 percent annually, twice the average growth in the OECD, 6 percentage points above world trade growth and only 4 percentage points slower than in China. It is also noted in the article that Turkey's global market share grew by 60 percent (from 0.53 to 0.82 percent) between 2002 and 2009 and is getting close to Turkey's share of the world population (1.06 percent).

Raiser stressed that Turkey increased its export sophistication and improved product quality, which was only achieved by trade integration with Europe. Underlining the importance of the customs union agreement signed between Turkey and the EU, Raiser argues that the elimination of most tariff and non-tariff barriers in goods trade between Europe and Turkey galvanized the modernization of the Turkish industry, attracted FDI and boosted Turkey's export competitiveness not just in the EU but in third markets as well.

In the last decade Turkey has diversified its export markets. In the article Raiser draws attention to this success and notes that Turkey has done quite well in reaching new markets particularly in the Middle East and Africa. Raiser quotes a sentence in his article to clarify Turkey's success story in diversifying its markets, which is "Selling European quality at Turkish prices." "By being close to the world's largest and most sophisticated market, Turkey is now well placed to "trade up to high income," stated Raiser in the article.

Previous reports prepared by WB experts indicate that about 60 percent of all export growth can be explained by increases in foreign sales of existing producers in existing markets and only 9 percent by exports of products that newly entered the export basket. "The implications for Turkey's future export prospects are clear. The country needs to get into higher value and faster growing market segments and it needs to have more companies engaged in exports," Raiser says.