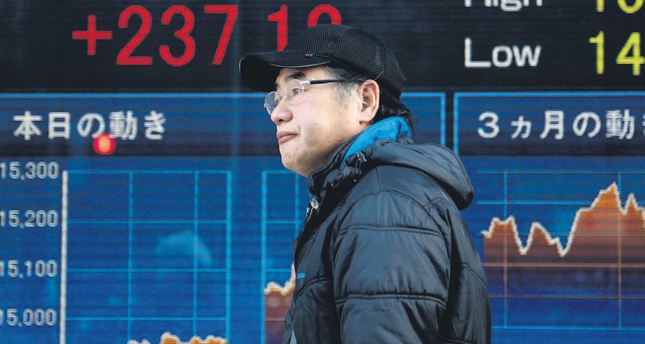 TOKYO — Japan's consumer prices rose 3.2 percent from a year earlier in April to the highest level since 1991, the government said Friday, largely due to a sales tax increase that is expected to dent growth this quarter. Other April data for the world's third-largest economy were largely in line with forecasts. Industrial production fell 2.5 percent from a year earlier and household spending sank 4.6 percent. Unemployment was 3.6 percent, the same as in March.

Prime Minister Shinzo Abe's policies aimed at ending a deflationary slump that has slowed growth for nearly two decades have made some headway, though the inflation rate remains well below the 2 percent target set by the central bank and government when the tax hike is factored out. Japan raised its sales tax to 8 percent in April from 5 percent. Japan's central bank estimates that 1.7 percentage points of the inflation rate in April could be attributed to the tax hike. The 3.2 percent figure is for the core consumer price index, which excludes fresh food. In its latest assessment of Japan's recovery, the International Monetary Fund said Friday that Japan appeared to be weathering the sales tax increase and exports are expected to begin picking up as demand overseas rebounds. It forecast that inflation would remain modest at 1.1 percent in 2014.

But it cautioned that Japan needs deep, structural reforms to support growth. "Near-term risks to the outlook are balanced, but the sustainability of the recovery over the medium term is at risk," it said.

Consumers and businesses ramped up spending ahead of the tax increase, boosting demand temporarily. The economy is expected to contract or at least slow sharply this quarter. Economists say wage increases are needed to ensure the strong consumer demand that would prompt companies to begin investing more for future growth.

Shortages of labor in some areas, such as construction and trucking, have been pushing prices and to a limited extent wages higher. But so far overall incomes have not kept pace with the tax hike and price increases.

Prices in Japan rose partly due to higher costs for energy as the yen weakened against the dollar because of massive monetary easing. Many businesses raised prices or offered less for the same price to compensate for their own higher costs. Revving up consumer demand through stronger purchasing power will be crucial, said Stephan Danninger, Asia and Pacific division chief for the International Monetary Fund. "The need for inflation to be meaningful in contributing to a stable and faster growing economy is through demand and not through the input of higher prices," he told a seminar in Tokyo on Friday.

The dollar is now buying about 101 yen compared with 80 yen two years ago. But the yen's recent stabilization near 101 to the dollar means inflation is getting less of a push from the exchange rate than it did last year. "The sharp fall in import price inflation points to a slowdown in consumer inflation in coming months, which should provide some relief to households' battered finances," Capital Economics analyst Marcel Thieliant said in a commentary. Massive monetary easing by the Bank of Japan has mainly given the government leeway to work on reforms needed to enhance Japan's competitiveness in the longer run and to repair government finances, said Masaaki Kanno, chief economist at JP Morgan in Tokyo. The April 1 tax hike and a further 2 percentage point increase planned for next year are part of the government's effort to bring under control Japan's huge public debt, which is more than twice the size of the economy. "One of the most important roles is for the BOJ to buy time," said Kanno.
RELATED TOPICS