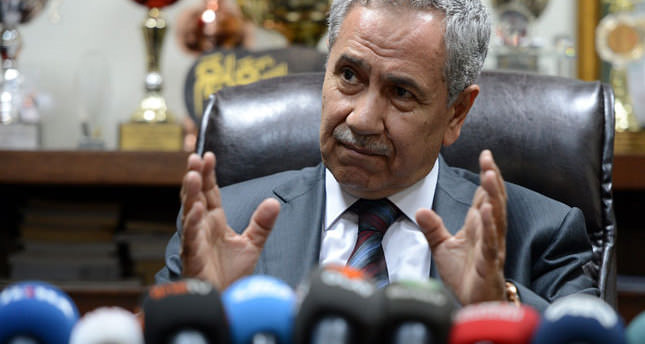 by AA Jun 02, 2014 12:00 am
ISTANBUL — In a press confrence on Monday, Deputy PM Bülent Arınç, stated that Turkey's Central Bank will not recieve any intervention from the Turkish government to reduce the current account deficit.

Turkey's Central Bank Governor Erdem Basci estimated that a recovery will continue in the current account deficit in the forthcoming period in his macro economic outlook presentation to the Council of ministers on Monday.

In his routine presentation to the Council of Ministers on Monday, Basci underlined that inflation is expected to peak in June and then start to abate from that point onwards while the growth of consumer loans will start to decline to 15 percent thanks to macro prudential measures taken by the Central Bank.

According to the presentation, the recovery in the current account deficit is estimated to continue while GDP will hover at around 4 percent in line with the moderate recovery seen in the global economy. Europe - Turkey's biggest export market, is set to recover with its market demand, a factor that is expected to make a significant contribution in closing the current account deficit.

However, Basci cautioned against excessive public consumption, which creates handicaps for the economy and said, "In countries with high private consumption, investment to GDP rates are low. Also growth is lower in these countries."

Basci also praised Turkey's performance on creating new jobs and estimated the trend in employment would continue in 2014 but stressed that current unemployment levels are still close to the levels prior to the global crisis despite the recent creations of new jobs.