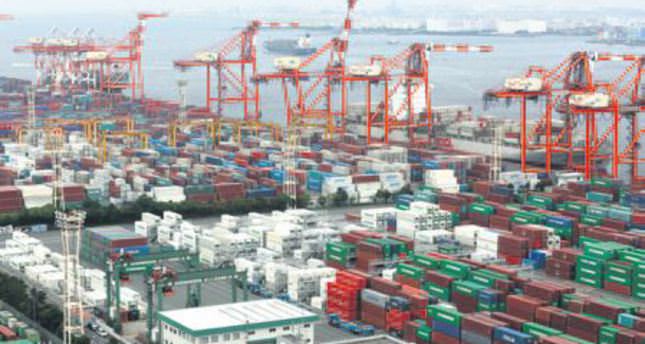 by Daily Sabah Jun 02, 2014 12:00 am
ISTANBUL — In the first four months of this year, total exports increased by 8.5 percent and imports decreased by 4.2, causing the foreign trade deficit to narrow by 24 percent, according to Turkish Exporters Assembly Chairman Mehmet Büyükekşi.

Chairman of the Turkish Exporters Assembly Mehmet Büyükekşi yesterday announced export and import statistics for May, 2014. Speaking at a press conference in Şanlıurfa, a southeastern province, Büyükekşi stated that Turkey's exports in May increased by 5.8 percent compared with the same period last year, reaching $13.41 billion (TL 28.12 billion).

During his presentation, Büyükekşi emphasized that Turkey's total exports in the first five months of 2014 increased by 8 percent, reaching $68 billion. "In the first four months of this year total exports increased by 8.5 percent and imports decreased by 4.2 which caused the foreign trade deficit to narrow by 24 percent compared with figures in the same period last year," Büyükekşi said. Büyükekşi remarked that this year's foreign trade figures show Turkey's current account deficit will keep its downside trend over the next months. "Growth is boosted by increasing exports, while domestic consumption decreases," Büyükekşi said. In his speech, Büyükekşi also evaluated recent global economic developments. "Market players in the global economic arena have been dealing with new trade paradigms. We, as Turkish businessmen, should catch up with newly-emerging paradigms to fulfill our economic targets," Büyükekşi.

Mehmet Büyükekşi emphasized that industrialists should be prepared for a possible cost increase in financing sources. "The U.S.' indicators for the second quarter of 2014 are respectively promising, however, China seems to suffer a bit more from slowing production.
Last Update: Jun 02, 2014 2:23 am
RELATED TOPICS