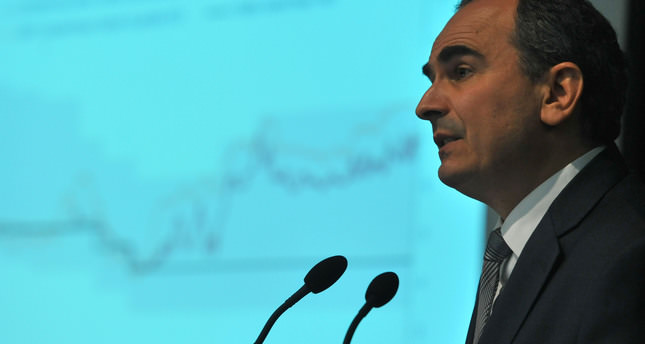 by Abdülkadir Karakelle Jun 03, 2014 12:00 am
ISTANBUL — Turkish central bank (CBT) Governor Erdem Başçı delivered his first address of 2014 to the Council of Ministers on Monday.

In his presentation Başçı emphasized that the pace of gross domestic production growth stands at about 4 percent. Contrary to predictions made by Turkish authorities, international agencies predict that Turkey will not able to maintain such a pace in 2014. However, those agencies' predictions Turkey's growth rate have proven wrong in previous years.

During his presentation Başçı also noted that inflation is expected to decrease as of June according to consumer price index data. Başçı stressed that Turkey will be faced with a disinflation period after June. Başçı stated that a high exchange rate caused an increase in inflation in the first five months of 2014. In his presentation Başçı remarked that the downside trend in the current account deficit is expected to continue over the next few months. Turkish media and economic circles have attributed a special meaning to Başçı's presentation in the Council of ministers because of the recent discussions among Prime Minister Recep Tayyip Erdoğan, ministers and Başçı on interest rates.

The cabinet meeting was the first confrontation between Erdoğan and Başçı after their altercation over interest rates. During his presentation, Başçı noted that current real interest rates are below the figures of pre-global-crisis period, which occurred in 2008-2009. He also emphasized that monetary tightening policies, including interest rate hikes, which have been applied since May 2013, covered the expectations of the monetary policy makers. It has been noted by the governor that monetary tightening has been a useful tool to fight against a rapid increase in the inflation rate which has also prevented the Turkish lira from decreasing drastically in value.After the presentation, Başçı spoke to the press. "The presentation went quite well. God willing, we will decrease inflation rates," he said.
The CBT increased the interest rates by 500 basis points on average in Jan. 2014. The CBT's interest move has been criticized by Erdoğan. "Inflation is a result of high interest rates, if you want to decrease inflation, you should start with lowering interest rates," Erdoğan said.

Turkish Central Bank Governor Erdem Başçı delivered his first address of 2014 to the Council of Ministers on Monday, the first time the governor came face to face with Prime Minister Erdoğan after the much criticized 0.5 percent rate cut.
RELATED TOPICS