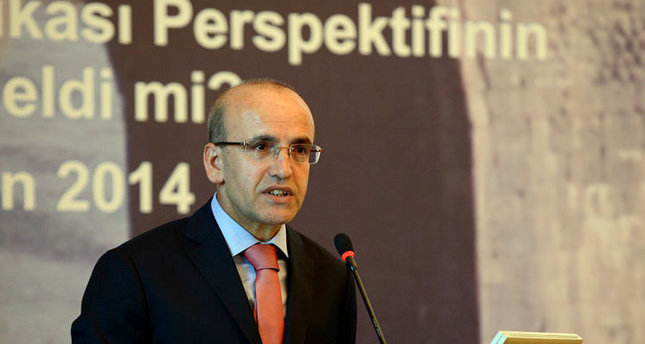 by Daily Sabah Jun 03, 2014 12:00 am
ANKARA — Turkey has come a long way in its fight against poverty and corruption but there's still a lot to do, says Minister of Finance Mehmet Şimşek, as the World Bank launched a report on Turkey's fiscal policy on Monday.

Şimşek said Monday that Ankara "has covered a distance" but improvements with regard to global economic and trade indicators were inadequate.

The World Bank launched a report titled "Turkey in Transition: Time for a Fiscal Policy Pivot?" at a conference in the Turkish capital on Monday.

The report argues that fiscal policy needs to adjust to support an increase in national savings and reduce the reliance on consumption-based taxes, which it says would in turn lay the foundation for sustained growth.

Turkey's economy grew by 4 percent in 2013. The EU and the Organization for Economic Co-operation and Development estimate this year's growth will be 2 to 3 percent.

Also attending the conference, Turkey's Minister of Development, Cevdet Yılmaz said Ankara's success over the last decade lies in its ability to reform even when it's not in a state of economic crisis.

"Turkey used to enter into a crisis every three years, today it is experiencing change without any crisis," Yılmaz said.

Turkey's gross domestic product increased by 257 percent between 2003 and 2012, reaching over $800 billion (TL 1.68 trillion), while the budget deficit decreased from 10 percent to less than 3 percent of yearly income in the same period.

According to the World Bank, Turkey ranks 69th out of 189 economies in Doing Business 2014 data. The country was ranked 44th among 148 countries in the Global Competitiveness Index.

The World Bank report recommendations include advice for Ankara to shift spending toward public investment and adopt a growth model less dependent on debt-financed consumption. It also advises increasing the participation of women in the workforce.