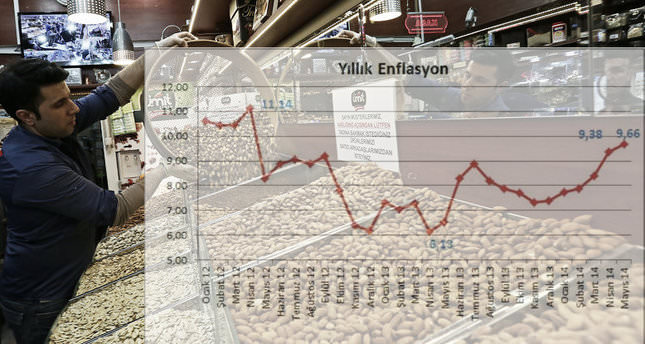 by Daily Sabah Jun 03, 2014 12:00 am
ISTANBUL — Turkey's inflation rate for May was 9.66 percent year on year, beating most analysts' expectations and giving a boost to the lira. Analysts expect inflation to continue at a slight upward trend for the remainder of the year and avoid hitting double digits.

The data comes as the central bank recently lowered its key lending rate by 50 basis points to 9.5 percent amid speculation it could again decrease the benchmark rate at the next meeting of the monetary policy committee, if inflation stays in the lower end of the target range.

Prime Minister Recep Tayyip Erdoğan has been vocal about his desire to see the central bank drastically reduce rates, in hopes of spurring economic growth.

External factors could be a major concern for Turkey, particularly when the U.S. Federal Reserve begins to tighten its policy and scale back the asset purchase program.

Gross domestic product is expected at be near 4 percent this year, according to the Turkish central bank.

Economists stated that the inflation data remained under market expectation in May. Also, Turkish Central Bank Governor Erdem Başçı said during his presentation in the Cabinet yesterday that it was estimated that the annual inflation rate would reach its height in May and a trend of decline would begin from June data. Burgan Bank's Investment Chief Economist Haluk Bürümcekçi said some favorable basis point influences would be effective from June. "For this reason, we estimate that the annual inflation level observed in May will be the peak point of this year. Since the current dollar/TL exchange rate remained under our year-end estimations (2.15), we continue to estimate that year-end CPI for 2014 will be around 8 percent," Bürümekçi said.

FinansInvest Chief Economist Burak Kanlı said inflation in May is much more favorable than market expectations and a summit was already reached on annual inflation.

According to Kanlı, two factors would cause the annual inflation's downside move in the next period, the basis point influence is the first factor, while the second one is that the appreciation observed in the Turkish lira within the latest period would cause a limited betterment on basic product class inflation.

"However, the key factor for the inflation's decrease under 8 percent during 2014 is food prices. In May, no favorable progress was observed on food inflation apart from seasonal effects. The drought is limiting the downsize movement. Unless a negative development happens on unprocessed food exports this summer, food inflation seems it will continue to be above 10 percent and its negative influence on the inflation will go on as well," Kanlı said.