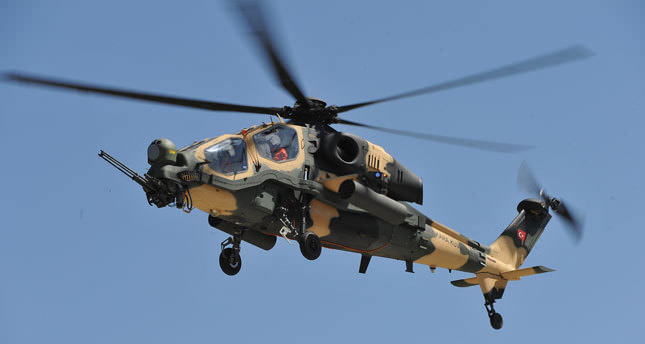 by Daily Sabah Jun 11, 2014 12:00 am
ISTANBUL — The Turkish military received the first three of its domestically made combat helicopters yesterday. The program will see the military receive 59 helicopters as part of a $3 billion joint Turkish-Italian venture.

Named ATAK, the helicopters have been produced in Turkey and will accompany 41 cobra-type attack helicopters on the inventory of Land Forces Command.

Agusta-Westland, an Italian-English joint company, sold all the technical facilities of helicopters including the licenses to Turkey for $3 billion. All rights of the helicopters are reserved to Turkish Aerospace Industries, TAI, and they will be sold to third countries only by Turkey. TAI also produced about 6,200 of the 6,400 pieces on the helicopter's airframe. Along with helicopter production, TAI was also responsible for fixing the avionic-arm systems on the helicopters and integration of Military Electronics Industries' (ASELSAN) national duty computer and weapon system.
RELATED TOPICS