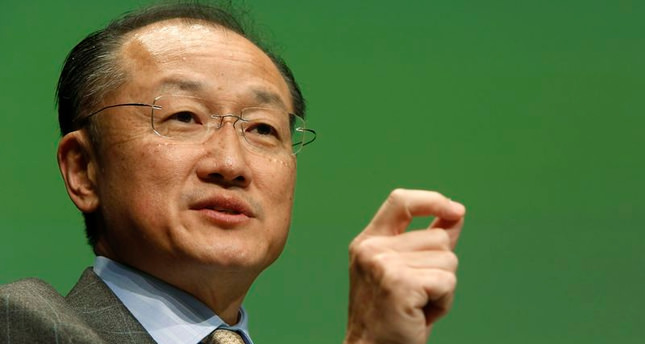 by Associated Press
Jun 11, 2014 12:00 am
The World Bank downgraded its forecast for the global economy this year, citing a bitter American winter and the political crisis in Ukraine.

In an outlook released Tuesday, the bank still expects the world economy to grow faster 2.8 percent this year versus 2.4 percent in 2013. But its new estimate is weaker than the 3.2 percent expansion it had predicted in January.

The U.S. economy by far the world's largest shrank at an annual rate of 1 percent from January to March, chilled by an unusually nasty winter. The political crisis in Ukraine dragged growth in Eastern Europe and Central Asia. Together, those factors will "delay the recovery we talked about in January but not derail it," World Bank economist Andrew Burns told reporters.

Helped by super-low interest rates, the world's wealthiest countries will expand 1.9 percent this year, up from 1.3 percent in 2013. In developing countries, growth is expected to stay flat at 4.8 percent.

In its twice-yearly Global Economics Prospects report, the World Bank estimates that the 18 European countries that use the euro currency will grow 1.1 percent collectively this year after shrinking in 2012 and 2013. It sees the U.S. economy recovering from the weak first quarter and growing 2.1 percent this year, up from 1.9 percent in 2013.

World growth is accelerating as the U.S. and Europe regain strength. Overall, the global economy is expected to expand 3.4 percent next year and 3.5 percent in 2016.

The rate of economic growth has stalled in China and other developing countries that had bounced back quickly from the financial crisis of 2008-2009. China's economy is expected to decelerate steadily, from 7.7 percent growth last year to 7.6 percent this year to 7.5 percent in 2015 and 7.4 percent in 2016.

In China, the slowdown is partly deliberate. Authorities are attempting to manage a transition from rapid growth based on exports and investment in real estate, factories and infrastructure to slower but more stable growth based on spending by Chinese consumers. But the Chinese slowdown has pinched other developing countries from South Africa to Brazil that provide the world's second biggest economy with raw materials.

The good news: The U.S. and Europe should pick up some of the slack as their economies improve and they demand more imports from developing countries. After growing less than 3 percent each of the past two years, world trade will expand 4.1 percent this year and 5.2 percent in 2015, the bank predicts.

Central banks, including the U.S. Federal Reserve, have been supporting economic growth by keeping interest rates low. Last week, the European Central Bank announced additional rate cuts and took the historic step of imposing a negative interest rate charging banks for deposits with the ECB in an effort to prod them to make more loans instead of hoarding money. Burns said the ECB's moves to protect Europe's fragile recovery were "appropriate" and "go in the right direction."

But he and other economists worry about what will happen when the central banks declare their mission accomplished and let interest rates rise again. Higher rates in the U.S. and Europe likely will lure investment away from developing countries. If the shift occurs too quickly, it could damage developing countries' economies and cause chaos in their financial markets a potential rerun of the Asian financial crisis of 1997-1998. Other risks to the World Bank's growth forecast include continued tension in Ukraine, political instability in Syria and Thailand and the possibility that China's economy slows faster than expected.