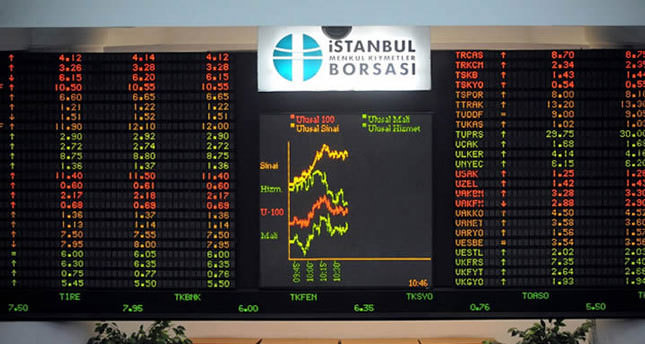 by Daily Sabah Jun 13, 2014 12:00 am
The Turkish markets, which were optimistic after the announcement of the growth figures in the first quarter, crashed as a result of tensions in Mosul. The sales in the stock market picked up when ISIL announced the kidnapping of the Turkish ambassador and the employees of the Turkish embassy. The stock index fell by 3.25 percent, while the U.S. dollar and interest rates increased. The optimistic atmosphere obtained due to the decision of the European Central Bank last week and the high growth figures announced in the markets was lost with the news from Iraq on Wednesday.

Islamic State in Iraq and Levant (ISIL) and other military groups taking over the second largest city in Iraq, Mosul and kidnapping the Turkish embassy employees, thus increasing geopolitical risks with Iraq caused Istanbul Stock Exchange to crash. The BIST-100 index fell by 2,651 points and closed the day at 79,200. The Istanbul Stock Exchange suffered the highest fall among all other stock exchanges around the world due to the events in Iraq. Experts noted that the tension to reach the Turkish Consulate pressurized the markets to sell their shares and that the unrest will continue until political stability is established in Iraq. While the sale trend was observed in the markets of all emerging economies, the tension in Iraq became an excuse to sell in the stock exchanges.

Despite these recent adverse developments, analysts argued that since Istanbul Stock Exchange has increased by 35 percent in the last three months and considering the decision of the European Central Bank and the expectation that the Turkish Central Bank will lower the interest rates, the rising trend will continue in the midterm. Especially the stocks of companies with investments in Iraq suffered extreme sales. Share certificates of companies like Enka İnşaat and Tüpraş, which obtains most of the oil it sells from Iraq also feel by 3.13 percent.
RELATED TOPICS