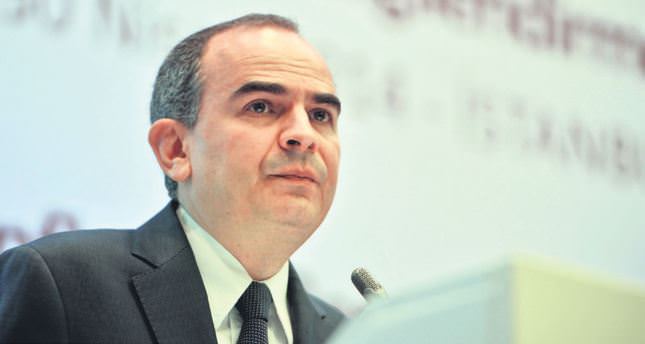 by Daily Sabah Jun 16, 2014 12:00 am
Central Bank of Turkey (CBT) Governor Erdem Başçı made a speech at an event titled "Future Cities Forum: Panel on Mega Cities and Financial Centers from New York to Istanbul," which was held in Istanbul. "In Turkey, the central bank and government members can clearly express their views on monetary policies. Reciprocal expression of ideas is a healthy behavior and does not pose any problem," Başçı said.

"We are conducting our work both independently and transparently in legal and practical terms. It is not easy to meet all these aspects together in most countries. The central bank has always prompted the government to act cautiously on fiscal policy. Similarly, members of the government also could make criticisms or suggestions regarding the central bank," Başçı said. He also noted that businessmen, journalists and columnists could also freely criticize monetary policy in Turkey, adding that everyone could express their thoughts, and there is a complete transparency on that matter. Başçı also noted that Turkey is in a process of disinflation in terms of price stability. "We estimate that the fall in inflation will start with June data," he said, adding that he expected the ongoing recovery in the current account deficit.

Başçı underlined that Turkey's growth of 4 percent is positive when current conditions in the world are considered, and even China could grow by 7 percent. "The healthy finance sector and the cautious macroeconomic policies implemented in Turkey continue to contribute to sustainable growth," Başçı said.

Along with the four factors of marketing, there is a fifth factor for bankers, Başçı said. "[The fifth factor] is being watchful and cautious.
Our bankers are acting very cautiously since they drew considerable lessons from the past. If more caution is needed, we take macro precautionary measures," he said. Başçı said it is possible for Istanbul to become the leading financial center in the world, and it could only be achieved through sustainability. "I will be in Konya on Monday, the city of Rumi. The best-selling book of love poems in the U.S. is Rumi's. Rumi writes about divine love. Divine love is always related to sustainability. Beauty on the surface might look "beautiful," but true beauty lies behind sustainability. We could make Istanbul the most beautiful financial center in the world," he said.

An idea clash between the Prime Minister Recep Tayyip Erdoğan and Başçı regarding the CBT's interest policies has been ongoing for a few months. In January, the central bank increased interest rates by 5 percent on average by showing global monetary trends and domestic political and economic ambiguities as a ground. The prime minister criticized central bank's decision of increasing interest rates, as they constitute an impediment to investment.

So he has said on every occasion that interest rates should be decreased. The prime minister indicated the immediate need for an interest cut by stating that the ambiguities were resolved and political stability now prevails in the country. On the other hand, ministries dealing with economic affairs said the CBT is working independently and has taken the most suitable decision in the light of their data.
RELATED TOPICS