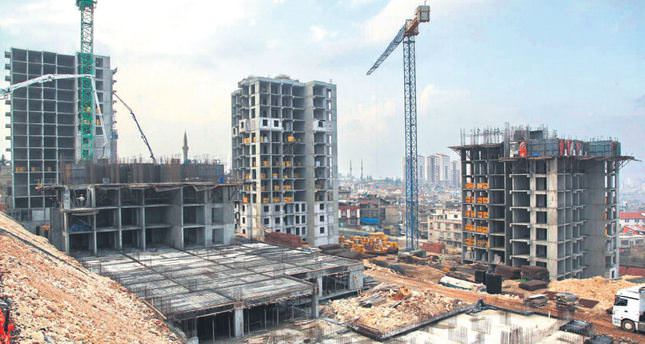 Turkey's construction sector grew by 5.2 percent in the first quarter of the year thanks to mega projects, including the third bridge on the Bosporus and the construction of a third airport in Istanbul. The Chairman of Turkish Contractors Association (TMB), Mithat Yenigün noted that the growth rate of the construction industry since 1999 has always been in line with the growth curve of Gross Domestic Product (GDP) and follows a fluctuating course.

During this period, in 2001 and 2009 the economy shrunk while the most rapid growth was observed in 2010. The year 2012 was a year of economic recession and in 2013, the Turkish economy experienced moderate recovery.

Yenigün noted that the construction sector grew at a faster pace than the economy and that the final data shows that the sector has a structural characteristic of shrinking faster during times of economic recession.

Yenigün further stated that members of their association are still breaking ground in both foreign and domestic construction projects. While investments in infrastructure based on public financing at regional and domestic levels are expected to slow down in the next period, Yenigün said housing development projects will continue at the same pace. "The urban transformation projects will offer further employment opportunities in both infrastructure and housing fields," said Yenigün, who added that if mega projects such as the third bridge and airport, other hospitals, railways and other similar projects which are planned to be financed by public-private partnerships are financed according to the improvements in international finance sectors, these will contribute to sectorial growth.

He further noted that due to changing economic conditions in the world, market diversification will become crucial and regions such as North Africa and Latin America will be able to offer opportunities similar to those that emerged in the world after the Arab Spring and changes in the Sub-Saharan Africa region.

Yenigün said that setting a growth target for the sector would not be realistic due to various uncertainties due to both domestic and foreign factors.

Noting that there is risk pendulum that is oscillating between politics and the economy, Yenigün added, "It is better to closely observe all risks and opportunities that may arise in a wider spectrum from macro economy to local investments." When opportunities that may arise on a project basis are considered along with the aforementioned risks, the growth in the sector is still expected to increase in line with
economic growth.

Experts also say that the Turkish construction sector in recent years experienced a dramatic increase in construction projects abroad.
In parallel with the increase in the number of such projects, revenue collected from them increased. According to information from the Ministry of Economy, the number of projects undertaken by Turkish contractors was 270 in 2003 and rose to 390 in 2013. Revenue from projects abroad by Turkish companies totaled $17 million (TL 37.26 million) in 2003 and increased to $82 million in 2013. The figure reached $94 million in March 2014.

As it is known that Turkey wants to reach $500 billion in exports by 2023, logically, the construction sector's exports should triple by 2023, which corresponds to $150 billion," Özdemir said.
RELATED TOPICS