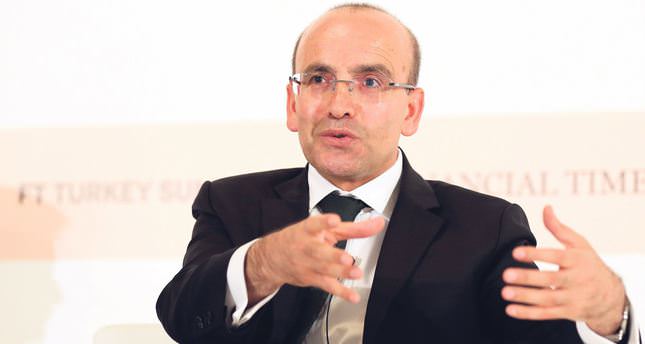 Maintaining political stability and harmony between the government and the presidency is a critical issue for Turkey's economy, while global economies are threatened by geopolitical conflicts

Turkey's Minister of Finance Mehmet Şimşek noted on Sunday during a TV broadcast that the world has been passing through an economically tough period stemming from from geopolitical and monetary policy conflicts of countries with giant economic volume, a period during which Turkey has had no tolerance for political and economic turbulence. "Upcoming presidential elections should not lead a way to conflict between cabinet and presidency. This will take Turkey's economy to the 90s," Şimşek said.

Concerning the question of whether there is trouble with the presidential elections being held in August and the 2015 general election, Minister of Finance Mehmet Şimşek said even the slightest unconformity has not been faced within the AK Party, which has been in power since 2002. He added, "I believe our team will overcome these elections harmoniously and by observing the national interests. If the president happens to be an opposing figure and inconsistency occurs between the government and the president as a result of this, the presidency has the potential of becoming an office that can bring things to a deadlock easily." Noting the difficult conditions faced by countries globally, Şimşek said: "The risk of high interest is escalating in the U.S. as of the second half of next year; most probably interest rates will climb on a global scale. The same goes for the U.K. as well.

The Global economy is gradually being overturned to a small extent." He also highlighted the coexistence of global developments in favor of developing countries and geopolitical tensions. "Under these circumstances, the last thing we desire is political instability and content between the government and the presidential office. Such kind of a conflict will take us back to the 1990s," he added. Şimşek noted that in terms of global and regional conjecture , Turkey is essentially passing through a difficult moment. "In this regard, maintaining political stability and harmony between the government and presidency has started to become a critical issue once again," the minister said.

When asked about the discussions regarding the coherence among cabinet members, Şimşek said the consequences matter at that point, adding that they were a team dealing with different groups. "For instance, our economy minister mostly deals with the exporters. But you should firstly consider if there is coherence. Of course it might be more right if we discuss those issues more often among us and do not express different opinions to the public; but demanding not to allow different views is not reasonable," he said.

Şimşek also said on the interest debates that desiring an interest rate cut is right for more investment and employment. However, since the country has many problems there is a search for balancing all the other factors, he said. Şimşek said rapid growth comes with excessive consumption however, "our prime minister does not favor that, either. He sometimes mentions productivity. There are many factors we must balance. If you decrease the interest rates very rapidly, consumption would also increase along with investment.

Last year, a citizen spent on average TL 87 out of his TL 100, while saving only TL 13. However, a citizen on average spends 67 TL in developing economies," Şimşek said. Şimşek said a part of the products purchased with credit were imported and there was a current account deficit problem in Turkey. "We also have concerns for investments, employment, and the growth rate. But as the economy authorities, we also aim at managing the problems we face. This is the essence of the matter." Şimşek also underlined that the markets determine interest rates, and the interest rates are predicted to enter a trend parallel to the inflation rate.

Stating that there are direct and indirect effects of geopolitical tensions on the economy, Şimşek said that "Iraq is our second largest export market after Germany And it is the country which we have the highest foreign trade surplus with. A $10 oil price surge negatively affects our GDP by 0.6 percent which equals $5 billion. In other words, when oil prices increase by $10, our current deficit rises $5 billion." Turkey is a country which is incredibly sensitive to the stability of the region.
RELATED TOPICS