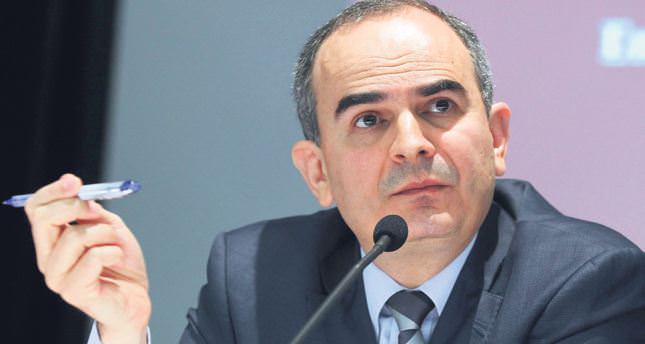 The Central Bank of Turkey (CBT) yesterday cut its main interest rate by 75 basis points. The Ankara-based bank's policymakers, led by Governor Erdem Basçı, pruned the one week bond repurchase rate to 8.75 percent from 9.5 percent but left other rates unchanged, the bank said in a statement. The bank's monetary policy committee decided on a "measured decrease in the one-week repurchase rate considering the improvement in the global liquidity conditions in recent months," it said in a statement. It kept its overnight lending rate at 12.0 percent and the overnight borrowing rate at 8.0 percent. On Monday, Economy Minister Nihat Zeybekçi had called for a sharp cut in the rates.

In defiance of the government, the central bank raised key rates in January in a bid to stem a steep drop in the value of the country's national currency the lira, raising the one-week repurchase rate from 4.5 percent to 10 percent.

Last month, the bank brought down that rate from 10.0 percent to 9.5 percent but drew Erdogan's wrath for being too timid. With the latest cut, the bank "is trying to balance the need to maintain credibility in the markets on the one hand and government pressure to lower interest rates substantially on the other," economists at Capital Economics consultancy said in a note to clients. It noted that "the macroeconomic data provide little justification to ease policy."

The central bank has replaced five executives after Erdogan's strong criticism of the interest rate policies pursued by its governor, who gave a hint of another small cut in interest rates last week.

Speaking to Daily Sabah, economist Dr. Burak Arzova of Marmara University and commentator at Bloomberg HT, noted that CBT will gradually cut the interest rates until August in accordance with domestic macro and micro indicators, as Başçı declared on several occasions. "With this decision banking profits are expected to pose an increase which will raise the value of the banking bonds in Turkey's stock market (BIST). Since, BIST will enjoy the interest rate cut for a short while," he remarked. Arzova also noted that CBT independently made the interest rate cut decision.

Highlighting the clash of ideas between Başçı and Erdoğan on interest rates, Arzova emphasized that the Code of the CBT, the source of the clash, must be revised. "Current CBT Code limits CBT's scope of authority with price stability. However, in developed countries central banks consider governments' fiscal policies, growth targets and current account deficit data while they are conducting monetary policies. That is why we can observe differences between government's agenda and CBT's agenda. That problem should immediately be solved with a new CBT Code," Arzova concluded.

Speaking to Daily Sabah on the matter, economist and president of Nişantaşı University Dr. Kerem Alkin expressed that markets were quite confident about the interest rate cut. "CBT's decision has various messages for both the government and market," he remarked.

Alkin underscored that CBT wants to maintain its struggle for decreasing the inflation rate, however when it cuts the interest rate radically exchange prices show an increase, which is one of the most significant reasons behind the inflation. "With its latest interest rate cut, CBT gave a clear message that it wants to cut the rates surely and slowly regarding global and domestic economic and political developments," he remarked.

Turkish Prime Minister Recep Tayyip Erdoğan chided the central bank several times after the radical interest rate hike in Jan. "Interest rates are high and must be reduced. We are tasked with balancing the [economic] climate," Erdoğan told his ruling party lawmakers in Parliament. Erdoğan emphasized that the interest rate must be lowered so that real investments can increase.

However, economists say that instability in Iraq and Ukraine creates a pressure on the Turkish economy and Turkish lira, which is causing the CBT to keep its tight monetary policy.
RELATED TOPICS