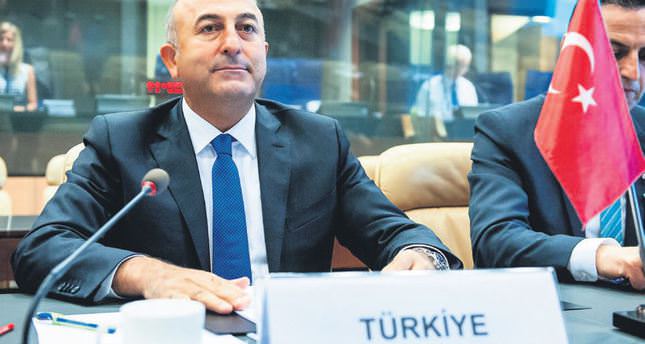 by Daily Sabah Jun 26, 2014 12:00 am
The Minister for European Union Affairs and Chief Negotiator Mevlüt Çavuşoğlu said Turkey's target is to make Turkey a regional logistics base and that 2023 foreign trade targets indicate that the government will make new investments in transportion infrastructure.

Çavuşoğlu attended the opening ceremony of the DP World Yarımca container terminal. In a press conference he congratulated DP World, one of the largest global container terminal operators, for its investment in Turkey. Çavuşoğlu stated that the terminal, fitted with the latest technology, will set an example for other investors and he noted that Turkey had the potential to become a regional logistics base thanks to its geographic location between two continents. Çavuşoğlu added that they have gained ground in many areas ranging from politics and economics to transportation and energy in the process for full EU membership.

He added: "Only in the last year, 16 primary and 195 secondary regulations have been made and there have been many changes in different public areas. The EU accession process is not just made up of making some changes in legislation or imposing new regulations. It is a known fact that the process of adaptation to the EU has very significant economic impacts. Moreover, this process is playing an important role in the steady growth of Turkey. Despite the current crisis, the EU is still one of the biggest economy in the world and one of the substantial trading partners of Turkey.

Nearly 40 percent of our foreign trade is conducted with EU countries. Although the EU has turned in on itself recently because of the financial crisis, it is aware of the change and transition in Turkey. 2013 became the critical year that we clearly saw the importance of the EU accession. Unfortunately, the EU cannot reflect this issue on the negotiation process due to some political obstacles."

The real agenda of the EU accession process for us is democracy, justice and development. It is obvious that Turkey's full membership to the EU is a win-win situation for both sides. Rapidly changing global dynamics and mutual benefits make the Turkey-EU union more important and inevitable day to day. Thanks to its growing domestic market, dynamic population, its leading role in the region, experienced private sector, safe investment climate, highly qualified labor force, developed infrastructure and corporate economy; Turkey can provide significant opportunities for the EU. The year 2023 is of great significance for Turkey's ruling AK Party, and not just because it marks the centennial of the establishment of the Republic of Turkey. 2023 is the deadline for ambitious economic targets set by the government to take Turkey to the level of developed world economies. While redefining the vision of Turkey, the AK Party introduced its noteworthy strategic plan in 2008 under the title "2023 Targets."

The 2023 vision primarily focuses on making Turkey one of the 10 biggest economies in the world from its current ranking of 16th. Sustainable economic growth is the key in reaching the 2023 targets. For that reason, the Turkish government has developed several strategies that include increasing per capita income to $25,000 (TL 53,311) and annual exports to $500 billion (TL 1.06 trillion), reducing unemployment to 5 percent and building export-oriented structures in the Turkish defense industry.
Last Update: Jun 26, 2014 1:27 am
RELATED TOPICS