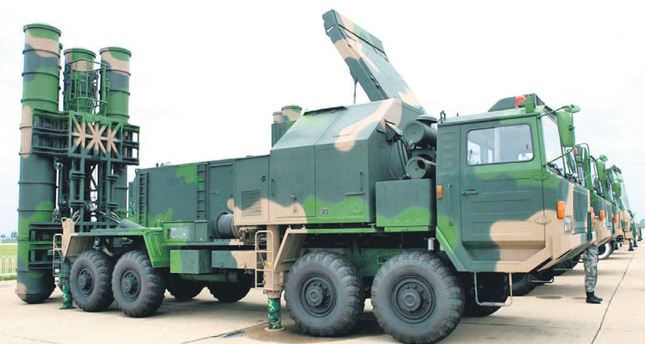 Turkey is expected to announce the results of the long-awaited billion dollar long-range air and missile defense system tender on Monday, European firms are more likely to procure the system against their Chinese rival

Turkey's Undersecretariat for the Defense Industry (SSM) is expected to make the final decision concerning the procurement of a multi-billion dollar long-range air and missile defense system tender, with European and Chinese firms in the running. Last September, the SSM executive committee chose China's FD-2000 (HQ-9) long-range air and missile defense systems over Western competitors, including the Italian-French Eurosam's SAMP/T Aster 30 systems. The Chinese manufacturer of the HQ-9 missile system, the state-run China Precision Machinery Import-Export Corporation (CPMIEC), offered a $3.4 billion high technology transfer. Turkish government officials announced they preferred the Chinese offer due to its competitiveness and potential for co-production in Turkey.

However, the company has been on the U.S. State Department's sanctions list since February 2013 due to proliferation concerns. NATO countries also raised objections to Turkey's move, claiming missile systems within the transatlantic military alliance must be compatible. NATO insists the technology will not be compatible with the evolving ballistic-missile shield being built in Europe. Although government officials announced that they preferred the Chinese offer due to its competitiveness and potential for co-production in Turkey, Ankara's decision raised concerns in the U.S. and other NATO countries. Since the announcement, the bidding deadline has been extended three times, and other bidding companies, Eurosam and Raytheon/Lockheed Martin, were given time to reconsider their bids until the end of June. The SSM's deadline expires on Monday, and there is no official statement regarding an extension of the deadline.

Therefore, it is expected that the SSM executive committee is about to announce the winner of the tender. Sources in the defense industry stated that SSM Undersecretary Ismail Demir visited China last week and held talks with officials from the Defense Ministry and the Chinese manufacturer of the FD-2000 missile system, the state-run CPMIEC. According to sources, Turkish officials demanded further cooperation and technology transfer and underlined that current conditions concerning technology transfer are not sufficient for Turkey.

Besides, U.S. defense industry giants including Raytheon and Lockheed Martin are also watching developments closely. Earlier this month SSM Undersecretary Demir attended the 33rd annual conference of the American-Turkish Council (ATC). Numerous U.S. officials as well as representatives of U.S. companies, including Lockheed Martin, attended the conference. Demir and company representatives are believed to have discussed details about a potential missile deal. However, an industry source familiar with the program remarked that the U.S. company did not revise its offer and declined to offer the options of technology transfer or coproduction to Turkey.

Therefore, the bidding companies, U.S. Raytheon and Lockheed Martin, are not very likely to win the tender. Sources in Ankara believe European companies have increased their chances with recent moves. Last week, Prime Minister Recep Tayyip Erdoğan visited the French capital, Paris, and Lyon, and during his visit Defense Minister İsmet Yılmaz was also part of the delegation. French Leader Hollande and Prime Minister Erdoğan are believed to have discussed details about a potential missile deal and Eurosam's offer during the bilateral talks; however, sources did not clarify the issue and refused to provide more information.

Earlier this year, Eurosam's officials paid several visits to Ankara to increase their chances. Antoine Bouiver, CEO of MBDA, a partner company of Eurosam, visited Turkey in March. During his visit, he said his company designed a new program for joint production with Turkey. "This project is very important for Europe," said Bouiver. "We designed a new program that consists of coproduction of radar and other communication tools with Turkish companies." Additionally, a delegation from Eurosam visited Ankara in April and met with officials from the SSM and the Ministry of Defense. According to sources, Eurosam updated its offer, lowered its price estimate to under $4 billion and increased the share of local contributions to the project.

In fact, the acquisition of such a multibillion- dollar strategic system naturally has multiple implications on political, economic, military and technologic dimensions. If Turkey decides not to continue with the Chinese company, Italian-French team Eurosam SAMP/T is in second place, and most likely Turkey will continue with the European firms.
RELATED TOPICS