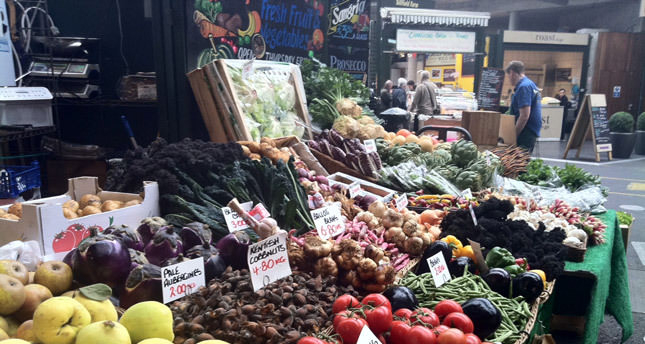 by Daily Sabah with Agencies Jul 03, 2014 12:00 am
Data released by TurkStat on Thursday showed a slight increase in the inflation rate due to a hike in oil and food prices, while economists and the central bank were quite sure that inflation would decrease in June

The inflation rate, which was expected to decline by about 0.03 percent due to the base effect as of the second half of the year, has unexpectedly increased by 0.31 percent in June. Economists highlight that the inflation stems from the hike in food and oil prices.

Turkey's Economy Minister Nihat Zeybekçi posted a press release on the inflation figures released by the Turkish Statistical Institute for the month of June.

In his statement Zeybekçi noted that according to the estimates of his ministry, the inflation rate will decline as of June and achieving such a drop despite all the geopolitical developments is crucial. He also said that in July this trend will continue at a faster speed.

Zeybekçi also underlined that keeping interest rates high to lower inflation and maintain price stability was risky and added, "The Chairman of the Federal Reserve Yellen said, 'The interest policy should focus on employment and creating a dynamic economy instead of focusing on maintaining financial stability.' He clearly stated that using interest rates to achieve financial stability would negatively affect both the inflation and employment. This explanation supports what we have always argued. Using interest rates as a weapon to fight economic stagnation would cause a high demand inflation."

Stating that there are other means except interest rates to regulate the demand portion of inflation, and the government has been trying to utilize these means, Zeybekçi pointed out that the new regulations on credit cards and bank loans were taken as measures for banks to direct their own credit portfolios for more production and export.

Speaking to Anadoly Agency Finance on the unexpected increase of the inflation rate in June and the meeting of the Monetary Policy Board of the central bank of Turkey this month, Odeabank's Strategy Director Ali Kırali attributed this increase to the increase in processed food prices for the month of Ramadan. On the contrary, due to the valuation of the Turkish Lira and the decrease in domestic demand, the upward pressure on core inflation has eased, Kırali noted.

Kırali also stated that in the rest of the year, due to the base effect, inflation rates are expected to fall gradually throughout 2014. While it is estimated that the inflation rate will be around 8.2 percent, the central bank of Turkey might limitedly increase its 7.6 percent estimation in its Inflation Report, due to be published on July 24.

Ziraat Investment's Economist Bora Tamer Yılmaz said the improvement in the Consumer Price Index is not yet reflected in the figures for this year and while the food prices, which are the main cause of the inflation, have decreased because of seasonal conditions, in general there was a 0.4 percent increase.

Yılmaz noted that a decrease in food prices of around 3.1 percent has been observed in June between 2005 and 2012 and the increase in food prices this year was partly due to tough weather conditions and the month of Ramadan falling in summer, in addition to foreign exchange rates not improving in favor of the Turkish lira.

Finansinvest's Chief Economist Burak Kanlı also highlighted that the inflation rate was higher than expected in the markets as annual inflation is still around 9 percent. Kanlı also underlined the price hike in food and the decrease in foreign exchange rates as the main reasons for such a high inflation rate. "The food prices, which have shown a declination trend in these months, increased this year," said Kırali.

He also noted that this rate was even above the estimates of the central bank of Turkey and this negative surprise is pressuring the central bank. He also indicated that a new interest rate cut might be discussed at the Monetary Policy Board's meetings but it will not be any higher than 75 base points such as the last time.

Speaking to Daily Sabah, economist Dr. Cemil Ertem noted that the increase in the inflation rate stemmed from the increase in the food prices and oil prices. "In the middle of June, unrest in Iraq reached a risky level and Turkey's consulate in Mosul was captured. Those two events sparked the oil prices to rise and indirectly sparked the inflation rate in Turkey," Ertem noted.