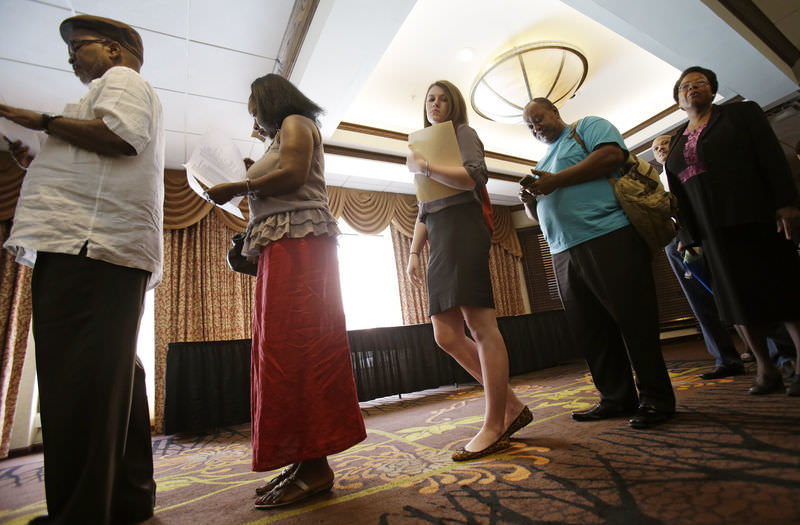 by Jul 03, 2014 12:00 am
U.S. employment growth jumped in June and the jobless rate closed in on a six-year low, decisive evidence the economy was moving forward at a brisk clip after a surprisingly big slump at the start of the year.

Nonfarm payrolls increased by 288,000 jobs, the Labor Department said on Thursday. Data for April and May were revised to show a total of 29,000 more jobs created than previously reported.

"It's an extremely bullish report. It's a report that really checks off all the positive boxes. I don't think you could have asked for a stronger read," said Jacob Oubina, senior U.S. economist at RBC Capital Markets in New York.

Economists polled by Reuters had forecast a gain of 212,000 jobs in June. It was the first time since the technology boom in the late 1990s that employment has grown above a 200,000-jobs pace for five straight months.

U.S. stock index futures were trading slightly higher in volatile trading after briefly dipping following the data, while prices for U.S. Treasuries fell. The U.S. dollar gained against a number of major currencies.

The closely watched employment report added to robust auto sales in June and data showing a steady manufacturing expansion in suggesting a plunge in economic output in the first quarter was a weather-driven anomaly.

Gross domestic product contracted at a 2.9 percent annual rate in the January-March period, causing a sharp downgrading of growth estimates for this year. Growth in the second half of the year is forecast around a 3.5 percent pace.

Average hourly earnings, which are being closely watched for signs of wage pressures that could signal dwindling slack in the labor market, increased by 6 cents in June. They were up 2.0 percent from a year-ago.

With new applications for jobless aid holding at lower levels and the share of businesses that cannot fill open positions rising, there is little doubt the labor market is tightening.

The labor force participation rate, or the share of working-age Americans who are employed or at least looking for a job, was steady at 62.8 percent. The share of Americans with a job rose to 59 percent, the highest since August 2009.

A broader measure of employment, which includes people who want a job but have given up searching and those working part-time because they cannot find full-time jobs, fell to 12.1 percent, the lowest level since October 2008.

The long-term unemployed accounted for 32.8 percent of the 9.5 million jobless Americans. The median duration of unemployment fell to 13.1 weeks from 14.6 weeks in May, the lowest in more than five years.

The improving tone of the labor market will be welcomed by the Federal Reserve and could spur debate on the timing of the first interest rate increase by the U.S. central bank.

Fed Chair Janet Yellen has argued that there is still considerable slack in the labor force, citing the low labor force participation, which she says partly reflects the departure of discouraged job seekers who could be enticed back into the workforce if conditions were to tighten.

Investors raised bets on an earlier rate hike, with futures markets showing a 55 percent probability of an increase in June 2015, up from just over 50 percent before the data.

"The real question is when do we start looking for and pricing in that first interest rate hike?" said Darrell Cronk, deputy chief investment officer of Wells Fargo Private Bank in New York.

"This data definitely leans toward, it doesn't make the full argument, but it leans toward pulling forward that time horizon as the job market strengthens."

Most economists do not expect the U.S. central bank to raise rates until the middle of next year at the earliest, but with the labor market tightening that could change.

The Fed has kept benchmark overnight lending rates near zero since December 2008.

Job gains in June were across all sectors. Manufacturing payrolls increased by 16,000, rising for the 11th straight month. Construction jobs advanced for the sixth consecutive month of gains.

Services industries employment jumped by 236,000, the biggest increase since October 2012, while government employment increased 26,000. The length of the workweek was steady at 34.5 hours.