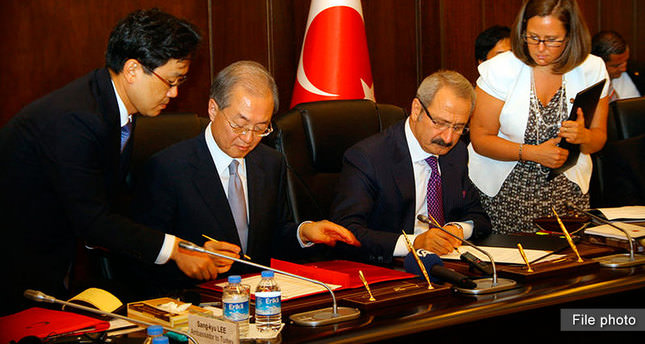 by AA Jul 08, 2014 12:00 am
Turkey and South Korea have paved the way for a new free trade deal covering the service and investment sectors, the Turkish Economy Ministry said Tuesday.

In a statement, the ministry said a seventh round of talks in the South Korean capital, Seoul, produced the agreement after lengthy negotiations, which started in August of 2013.

The ministry said it is foreseen that the free trade agreement would be signed by the end of this year and would take effect in 2015.

A separate free trade agreement was implemented just over a year ago to remove trade barriers for products-and since then bilateral trade has leapt more than 30 percent to $6.3 billion.

The ministry expects the new agreement will help greatly expand trade between the two countries.

The ministry also said 248 South Korean companies were operating in Turkey as July of this year.

South Korea and Turkey already exchange services worth around $740 million per year.

Turkey has 17 trade deals, but none so far that stretch beyond products in the service and investment sectors.