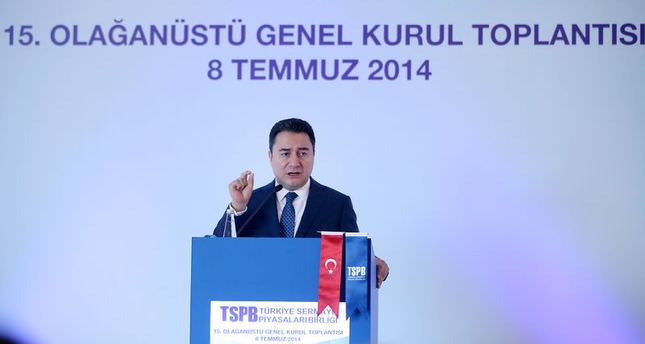 by Daily Sabah Jul 09, 2014 12:00 am
Deputy Prime Minister Ali Babacan, at the 15th Extraordinary General Meeting of Turkish Capital Markets Association (TSPB) on Tuesday, has announced that the Supreme Board of Judges and Prosecutors (HSYK) are working towards establishing financial courts as part of the democratic reforms, an unprecedented phenomenon in the country.

Speaking to the audience, Babacan explained that all the necessary regulations that needed to be made under the scope of Istanbul Financial Center Initiative have been completed in the past five years and the financial courts were a part of the project. "If we want Istanbul to become an international financial center we need expert courts which will especially focus on financial issues and will be able to make speedy decisions" said Babacan, who noted these courts will provide the legal infrastructure to resolve relevant matters while adding that such reforms are of vital importance for Turkey's future and growing economy.

Babacan also expressed Turkey has had a four percent growth rate in the past year despite numerous financial and political setbacks due to the Gezi Park incident of May 2013 along with the Dec 17 corruption probe orchestrated by agents of the Gülen Movement within the judiciary and stated Turkey will continue to grow.