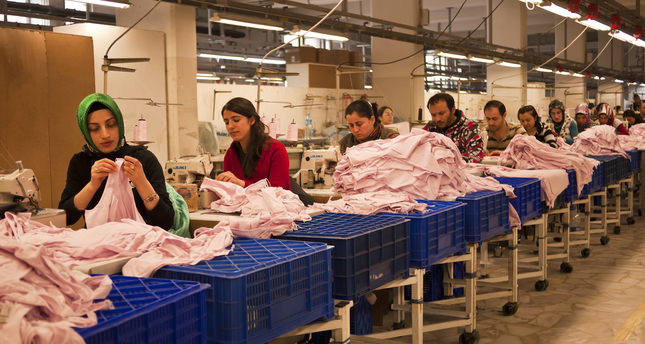 by AA Jul 16, 2014 12:00 am
The number of people out of work in Turkey has fallen by 168,000 in April to 2.57 million, the same level as at the end of last year, official figures released yesterday show. The unemployment rate now stands at 9 percent of the adult working population, the country's statistics agency TurkStat announced. The news, seen as a confirmation of Turkey's continued capacity to create jobs, comes as inflation was recorded to have fallen to 9.16 percent in June, 50 points less than the country's yearly inflation rate in May. At just over 26 million, the number of people working increased by 617,000 in April. Of those employed in April, 21.3 percent worked in agriculture, 20.5 percent in industry, 7.3 percent in construction and 50.9 percent in the service sector.


The jobless figure for 16 to 24 year olds fell by 36,000 in the three months ending in April to 724,000, the lowest number in two years. Unemployment in Turkey had risen above the government target of 9.5 percent to 9.7 percent in 2013 as the labor force growth outstripped the number of people employed. As the number of unemployed people increased by 229,000 in 2013, the number of employed people also rose, by 496,000, from the previous year to reach 25.2 million people in December 2013. According to its medium-term program, the government foresees unemployment reaching 9.4 percent this year. That is better than the forecast for the European Union. The European Commission, the EU's executive arm, projects that unemployment across the EU will rise to 10.5 percent before leveling off. In April, the eurozone unemployment rate fell to 11.7 percent, while the rate for the full, 28-member EU fell to 10.4 percent, the EU statistical body reported for June.
Last Update: Jul 16, 2014 12:54 pm
RELATED TOPICS