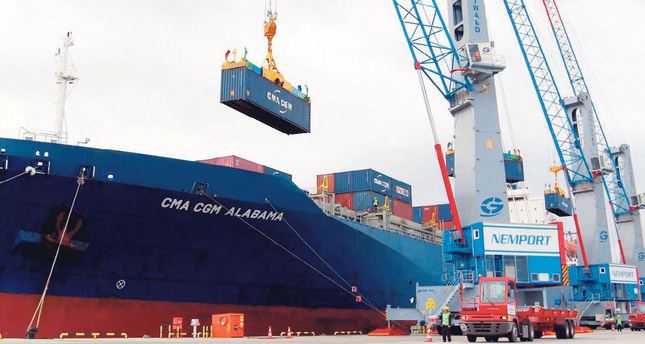 by Daily Sabah Jul 26, 2014 12:00 am
Turkey's foreign trade deficit fell for the sixth-straight month, according to figures released Friday by the Turkish Statistical Institute. June's deficit dropped to $7.8 billion (TL 16.3 billion) in June of this year from $8.6 billion in the same month last year, a fall of 8.8 percent, the Turkish Statistical Institute reported. The downward trend started in January and gained momentum after the Central Bank of the Republic of Turkey (CBRT) introduced drastic interest rate hikes in response to the U.S. dollar's rise against the Turkish lira in mid-January. Turkey's Banking Authority imposed new measures to restrict private consumption and ease the current account deficit.

The institute valued June's exports at $12.9 billion, a 4.2 percent increase from May , and imports decreased by $236 million and total imports reached 20.7 billion, a 1.1 percent decrease compared to last month. Following Europe's recovery, exports to the European Union rose by 14.7 percent to $5.2 billion in June compared to the same month of 2013. Germany, EU's largest economy and Turkey's main export market, is worth $1.3 billion while imports from Russia - Turkey's main source for its energy needs such as gas - stood at $2.14 billion.

On July 23, Deputy Prime Minister of Turkey, Ali Babacan said the effects of the European recovery and the implemented economic measures have been seen quickly, with a 10 to 20 percent increase in exports to countries such as Germany, Spain and the United Kingdom. As the economic recovery in Europe continues in the first half of 2014, country's exports managed to increase by 7.3 percent to $80 billion. According to the Turkish Exporters' Assembly, exports to neighboring Iraq fell by 21 percent in June, the exporters' group said, as recent turmoil has hampered exports to Iraq. The Chairman of the CBRT, Erdem Basçı noted that the net export figures are supporting growth and stabilization at a presentation Basçı made at the Board of Directors meeting of the Turkish Exporters' Assembly.

Noting that Turkey's share in global export is increasing, Basçı also noted that CBRT is supporting exports through rediscount credits. "Despite the tough global conditions, exports are increasing and Turkey's share is increasing in the world market . The increase in the rate of exports to cover imports also continues. Most of the rediscount credits have 8-month terms," said Basçı and added that the recent geopolitical risks have adversely affected the economic indicators. "Indicators show that the recovery in the eurozone will continue, which is supporting exports. Lately, export demand is mostly received from the EU countries," noted Basçı.
RELATED TOPICS