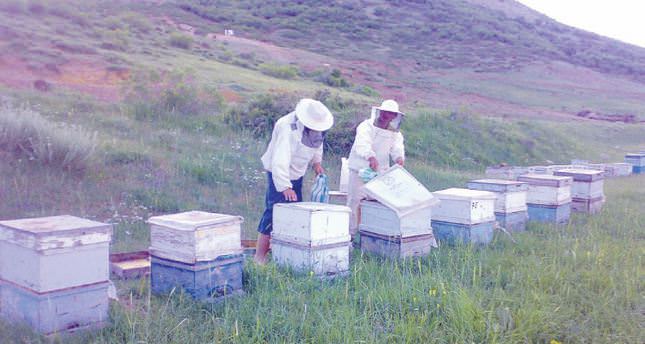 The Kurdish reconciliation process that began between Ankara and Kurds in 2013 to end the decades-long conflict in the southeast between Turkish forces and the PKK has revived southeastern Anatolia's economy. Many citizens fled their villages due to the PKK taking up arms against Turkey in 1983 in order to carve out a separate state in the region, are now starting to return home thanks to support from the government. Financial aid totalling TL 45 million has been allocated to the provinces of Diyarbakır, Batman and Siirt, where honey production on the plateaus, which were once banned from export, has seen a resurgence.

The gardens and orchards which were once too dangerous to enter are now full of growing fruit. The locals who emigrated a while ago have now returned to their home villages and taken up farming. The Turkish daily newspaper, Sabah spoke with citizens whose lives have been changed by the financial aid provided by the government in partnership with the International Farming Aid Fund.

Citizens who have returned to their home towns which they had to desert years ago are producing some of the rarest products in the world such as the "Zivzik pomegranate," "Sason strawberry" and "Pervari honey." They are all pleased to be able to use their own gardens and orchards without fear, and they state their common hope is for the Kurdish reconciliation process to be successful. "That is all we ask from our prime minister," is what they all utter. Seyfettin Onğulu, who returned to his village, Zivzik, after 12 years in Ankara, started producing "Zivzik Honey." He has owned his own factory for two years and "[One] hundred percent natural fruit juices are being produced [there] and sold all around Turkey. I am so happy to have returned to my village at the age of 50. I now have my own job thanks to the government. We all hope for the Kurdish reconciliation process to succeed," said Onğulu. He added that their village, which for a certain amount of time had become a "ghost village," now has 50 families living in it.

Faik Efe, who has 14 kids, has now started producing Pervari Honey, with the support of the government. Efe, who is also the head of the Beekeeper's Union, said "We are now producing honey on our plateau which we could not visit before because we were scared. For the first time we have received financial aid for the huts."

He said that those who want to sabotage the burgeoning peace process are heartless and anyone who considers themself to be a humanitarian should be in support of the Kurdish Reconciliation Process." He also stated that thanks to financial aid given by the government, 900 families are earning livings from the production of honey.

Ahmet Herdem, a farmer in the village of Kelhasan in Batman also returned to his village three years ago, which was emptied in the 90s, and has begun producing Sason Strawberry. "The Kurdish Reconciliation Process has relived this region...our only request from our prime minister is to complete the process successfully," said Herdem.

Zekeriye Ökmen, another farmer in the village of Bademli in Diyarbakır said that 90 families now live in their village which was once empty. "I have 30 grandchildren. We grow fruit here and this is an assurance for their future. All we needed was peace and now we have achieved it," said Ökmen.

Speaking on the matter to Daily Sabah, economist Dr. Cemil Ertem said that the reconciliation process has been built on an economic basis. "The Turkish government endeavored too much to finalize the longawaited Southern Anatolia Project (GAP) which would bring wealth and peace to the region. More than $30 billion [TL 62.7 billion] has been invested in the region for the project since the AK Party came to power.

Thanks to the project, new irrigated areas have emerged on which industrial agriculture has been promoted. This led to the income distribution gap narrowing in the region," Ertem noted.

He also said that the reconciliation process will accelerate economic integration with the Iraqi Kurdish region. Highlighting possible energy investments, Ertem remarked that a new capital flow will emerge between Turkey and the Kurdish region due to the peaceful atmosphere promoted by the reconciliation process. "Economic dynamism is expected to boost ordinary peoples' welfare," Ertem concluded.

The Southern Anatolia Project (GAP) was originally 13 large-scale irrigation and hydraulic energy production projects over the Euphrates and Tigris rivers that would create 22 dams and 19 hydraulic power plants. Today, GAP has turned into a fullyfledged socioeconomic development effort comprising -apart from irrigation and power facilities - projects on rural and urban infrastructure, agricultural infrastructure, transportation, investments in industry and other areas including education, health, housing, tourism and gender. As such, the project is a multi-faceted regional development effort which is expected to bring about changes affecting not only the region but the country as a whole. While GAP is a multi-sector regional development project, agriculture will be the driver behind development.
RELATED TOPICS