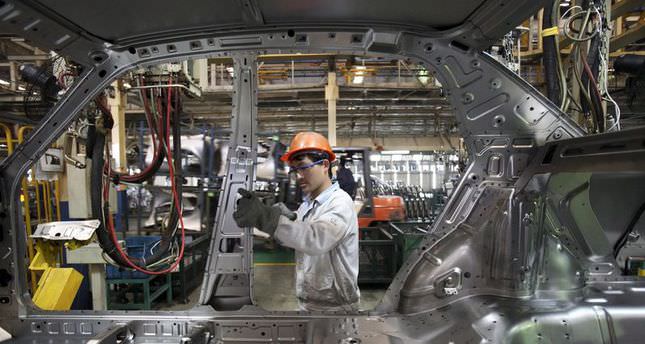 Activity in China's vast factory sector expanded at its fastest pace in 27 months in July, while industry surveys across Asia showed a boost in export orders that hinted at a long-awaited revival in global trade

Chinese manufacturing activity increased sharply in July, rising at its fastest pace in more than two years, an official survey showed Friday, as the world's second-largest economy shows signs of increasing momentum. The official purchasing managers index (PMI) hit 51.7 last month, the National Bureau of Statistics said in a statement. The figure was up from 51.0 in June, and the best since 53.3 in April 2012. It was also above the median 51.4 forecast in a survey of nine economists by The Wall Street Journal. But the figures came after data showed price falls in China's key property sector were accelerating. "We are optimistic about China's economic outlook in the remainder of this year, as the growth momentum is picking up while inflation remains mild," ANZ Bank economists Liu Li-Gang and Zhou Hao said in a note reacting to the PMI survey. The index tracks manufacturing activity in China's factories and workshops and is a closely watched indicator of the health of the economy. A reading above 50 indicates growth, while anything below points to contraction. Separately, British bank HSBC said its final PMI reading for July also came in at 51.7, up from 50.7 in June but weaker than the preliminary 52.0 announced last week. HSBC said it was an 18-month high. Qu Hongbin, the bank's chief China economist, said small revisions to several sub-indices brought the number down from the preliminary figure. "Nevertheless, the economy is improving sequentially and registered across-the-board improvement compared to June," he said in a press release accompanying the data. "Policy makers have been continuing with targeted easing in recent weeks and we expect the cumulative impact of these measures to filter through in the next few months and help consolidate the recovery." Chinese authorities have since April introduced a series of measures to bolster growth, including tax breaks for small enterprises, concentrated infrastructure outlays, and incentives to encourage lending in rural areas and to small companies. China's economic growth accelerated to a higher-than-expected 7.5 percent in the second quarter, up from 7.4 percent in the previous three months, which was the worst since a similar 7.4 percent expansion in July-September 2012. The rebound helped relieve concerns that arose earlier this year when growth slowed in the first quarter to its slowest pace in 18 months, prompting authorities to introduce what economists have dubbed "mini-stimulus" measures. China in March set its annual growth target for this year at about 7.5 percent, the same as last year. The country's leaders are trying to shift its economic model away from a historical over-reliance on large, state-supported investment to one where the country's increasingly affluent consumers propel economic growth. In a report on the PMI indexes, Julian Evans-Pritchard, China economist at Capital Economics, said the readings "suggest that economic activity is still being supported by healthy foreign demand along with state-led infrastructure investment and other targeted stimulus measures", which he added, "have helped offset continued weakness in the property sector". Economists have expressed concern that an unruly slowdown in housing prices has the potential to upset the government's economic growth scenario. China's decline in property prices accelerated in July, an independent survey showed. The average price of a new home in 100 major cities was 10,835 Yuan ($1,757; TL 3,773) per square meter last month, down 0.81 percent from June, the China Index Academy (CIA) said. It was the third consecutive monthly decline and an acceleration from the falls of 0.50 percent in June and 0.32 percent in May, which was the first in nearly two years, according to CIA data. Evans-Pritchard added that while authorities appear to be focused now on structural reforms, more limited stimulus is likely to address such weakness. "We do expect further targeted measures to be rolled out at some point in order to offset the continued drag from property," he wrote.