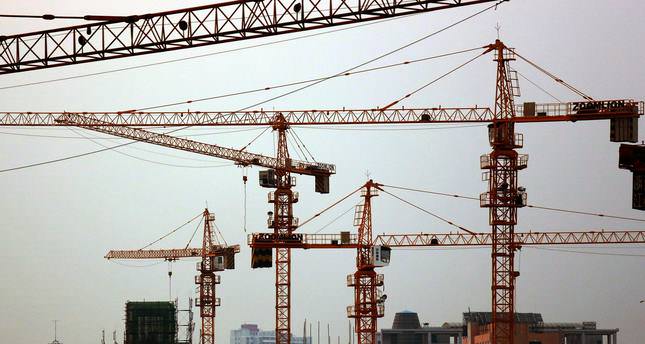 by Daily Sabah Aug 01, 2014 12:00 am
Overseas contracting services, which have rapidly grown in recent years through investments in risky areas that are close to Turkey, have started to give negative signals in 2014 with the escalation of tension particularly in Iraq and Libya. According to the data released by the Turkish Contractors Association (TMB), the total cost of the projects that were undertaken in the first half of 2014 amounted to $10 billion (TL 28.64 billion), showing a decrease of 16 percent compared to the same period of last year. In the first half of 2013, the total cost of the projects that were undertaken abroad was $11.6 billion.
A total of 114 projects were undertaken in the first half of 2013. The total value of 7,141 projects , which were undertaken by Turkish firms abroad in the whole of last year, reached $250.9 billion, while the total cost of them hit $31.7 billion.
The TMB authorities released a report regarding the economic condition and developments in construction and contracting sectors. The report suggests that current troubles in Iraq and Libya have brought down the total undertakings of the sector. It also points out that in the period January-June 2014, Turkish contractors undertook 116 new projects whose total value is around $9.9 billion in 33 countries. The countries which hosted the most projects were Qatar, Algeria, Iraq, Turkmenistan and Libya respectively. By the end of June 2014, a total of 7,488 projects, whose value was $284.6 billion, were undertaken in 103 countries.
The report said, "It is seen that the total cost of projects that were undertaken overseas in the first half of 2014 has been much lower compared to the same periods in previous years. It is thought that this situation is mostly caused by the developments in Iraq and Libya, which are among the most important markets for Turkish contractors."
It was also noted in the report that the Foreign Ministry, Economy Ministry and the Union of Chambers and Commodity Exchanges of Turkey (TOBB) have launched joint initiatives to tackle the problems.
According to TMB figures, the total cost of the projects that have been undertaken by the Turkish contracting sector since 2006, has hovered around $20 billion. A business of $31.7 billion was undertaken in 2011 alone, while this figure peaked with $31.7 billion in 2013. If risks deepen in the remainder of 2014, this figure will be less than $20 billion.
Last Update: Aug 01, 2014 6:22 pm
RELATED TOPICS